Cornyn, Sinema urge Biden to use 'full authorities' at border 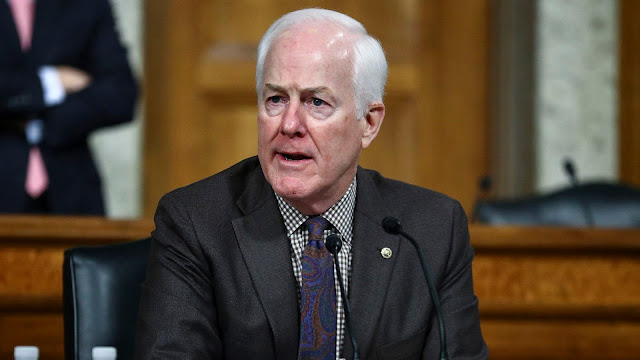 GOP Sen. John Cornyn (Texas) and Democratic Sen. Kyrsten Sinema (Ariz.) are teaming up to urge President Biden to use his “full authorities” to respond to an “ongoing crisis” at the U.S.-Mexico border.
Sinema and Cornyn, who both represent states that share a border with Mexico, sent Biden a letter on Monday asking him to take “immediate action” in two areas: Making sure there are enough “resources and facilities” along the border and improving the asylum process.
“We write to urge you to use your full authorities to effectively respond to and successfully manage the ongoing crisis at our Southwest Border. It is critical that our nation take aggressive steps to secure our border, protect our communities and ensure migrants are treated fairly and humanely,” they wrote.
They added that they would work in Congress to “develop bipartisan and commonsense responses to the surge of migrants at the border.”
The letter comes as Republicans have seized on the surge along the border to hammer Biden and congressional Democrats, saying they created the burgeoning humanitarian pressure point by walking back Trump-era policies.
Democrats have largely refrained from criticizing Biden, but used words like “crisis” and “challenge” to describe the situation that the administration is facing.
Sinema and Cornyn warned that current facilities were “insufficient” and that the Department of Homeland Security needs to improve “coordination and cooperation” with other federal and local agencies.They recommended DHS create “regional processing facilities" that, the senators float, could be used for "effective and rapid collaboration" of things like asylum interviews and medical screenings.
They are also urging the administration to make changes to the asylum process — a politically tricky issue that top Democrats have warned could bog down immigration legislation on Capitol Hill.
"We cannot afford to be consumed by partisan battles on this critical topic. We will continue to seek bipartisan agreement with you and our colleagues to develop common-sense solutions that improve the situation on our border and keep our communities safe," the senators added.
The letter comes after Axios reported that the number of migrant children being held in U.S. Border Patrol custody for longer than 10 days has quadrupled in the past week.
Though U.S. Border Patrol facilities are only permitted to hold children for 73 hours, Department of Homeland Security (DHS) documents show that 3,314 children have been held in custody for longer than that limit, with 2,226 being held for more than five days and 823 for more than 10 days.
Asked about the border crisis, Department of Homeland Security Secretary Alejandro Mayorkas pointed the blame back to the Trump administration.
"It is difficult because the entire system was dismantled by the prior administration," Mayorkas said on Sunday. "There was a system in place in both Republican and Democratic administrations, that was torn down during the Trump administration, and that is why the challenge is more acute than it ever has been before."
Both Mayorkas and Biden have stated publicly that the border is closed, in an attempt to prevent immigrants from making the journey to the United States.
Biden said on Sunday that he will visit the U.S.-Mexico border "at some point."
National World