Cornyn, Cruz to lead Senate delegation to border next week 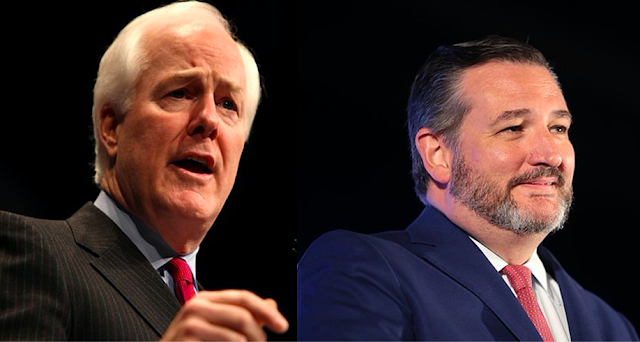 Sens. John Cornyn (R-Texas) and Ted Cruz (R-Texas) plan to lead a Senate delegation to the U.S.-Mexico border next week amid an influx of migrants that is creating a real-world and political crisis for the Biden administration.
The Texas senators issued a media advisory that they will lead a group of lawmakers to the Rio Grande Valley Area on March 26 to hold a tour of the border and a roundtable with local stakeholders.
The tour comes as a surge of migrants and unaccompanied children flock to the border seeking entry to the U.S. as both parties call the situation a “humanitarian crisis.”
Reports this week found that 4,200 children are being held in Customs and Border Protection cells designated for adults, a jump of 1,000 from the previous week. Some children are spending an average 117 hours in these facilities despite a 72-hour legal limit.
Republicans have amplified attacks on Biden’s immigration policy amid the surge, with House Minority Leader Kevin McCarthy (R-Calif.) leading a delegation of 12 members on a tour of the border in El Paso, Texas, on Monday.
McCarthy, in remarks during the tour, attributed the rise in migrants at the border to the Biden administration’s reversal of former President Trump’s immigration policies and progress on a border wall. He called on Biden to visit the border as he travels the U.S. to tout the recently passed COVID-19 relief package.
Biden committed to a more “humane” treatment of migrants after Trump received criticism for detaining children in “cages” during a 2018 surge. But now, the Biden administration is left to try to make room for the increasing number of unaccompanied children.
When asked if the living conditions of these children was acceptable, White House press secretary Jen Psaki said, “It’s not acceptable, but I think the challenge here is there are not that many options.”
“We have a lot of critics, but many are not putting forward solutions,” she said. “The options here are sending the kids back on the journey, sending them to unvetted homes or working to expedite sending them into shelters where they can get treatment by medical doctors, educational resources, legal resources and mental health counseling.”
Democrats, including Speaker Nancy Pelosi (Calif.), have cast the blame for the influx in migrants on Trump, saying he left Biden with a “broken system.”
Texas