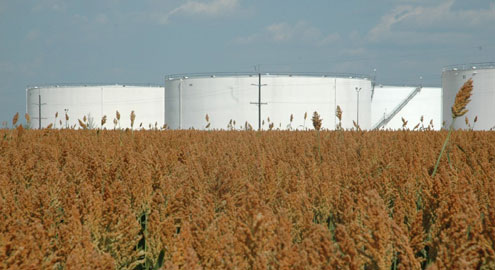 Texas row crop producers might have the luxury of choosing between sorghum, corn and cotton as all three commodities are seeing high prices with the 2021 planting season underway, according to a Texas A&M AgriLife Extension Service expert.
Mark Welch, Ph.D., AgriLife Extension grain economist, Bryan-College Station, said farmers will have options in 2021 based on market prices but may make decisions based on soil moisture levels in their location, input costs, past yields and crop insurance protections.
“This year is unusual in so many ways, but virtually every summer crop is looking at strong prices, and every commodity is looking to buy acres of cotton, corn, sorghum and soybeans,” Welch said. “Texas farmers know what works best for them, and it will be interesting to see what they actually plant because there is strong competition among the various row crops.”
Grain sorghum acres have been strong historically in Texas, though acres have dipped in recent years due to better revenue for corn and cotton, he said. But sorghum’s current price premium compared to corn may reverse that trend and help it eclipse planted corn acres for the first time since 2015.
Welch said high prices, low input costs, exceptional drought tolerance and strong export demand for feed grain from China make sorghum a more competitive option for Texas producers than seen in recent years. China’s tariff system increases import costs for corn and wheat when imports exceed certain levels. Sorghum and barley do not face the same tariff restrictions.
This gives U.S. sorghum, which accounts for about 80% of global sorghum exports, an advantage in the market that consumes the most food and feed grain globally, Welch said. China accounts for about 80% of global sorghum imports.
“We have very little export competition,” he said. “So, when it comes to exports, you have basically one buyer and one seller, and that can be scary when tensions are high and you’re dealing with a trade dispute. But recent projections from U.S. Department of Agriculture support exporting consistent levels of sorghum to China for the next several years.”
Row crop competition
Welch said steady exports of grain sorghum to China is a big part of its price surge.
Average cash prices for sorghum are $6.40 per bushel compared to $5.90 per bushel for corn, giving sorghum a 50 cent per bushel cash premium over corn, he said. For perspective on how far sorghum prices have come, Welch said farmers were getting $3.40 per bushel for corn and sorghum was $2.95 per bushel, a 45-cent discount to corn, in early August.
Sorghum also has an input cost advantage over corn and cotton, he said. Sorghum seed cost for planting can be much less than that of other crops and generally has lower use requirements for fertilizer and water.  However, the 10-year average sorghum yield in Texas is about half that of corn, 57 bushels per acre compared to 128 bushels per acre.
Another advantage high-yielding crops like corn and cotton have in this current environment is crop insurance protection. Higher base prices this spring combined with relatively higher average yields can provide higher levels of revenue protection compared to crops with lower average yields.
In addition, for insurance products with a March 15 sales closing date, the base price for corn was $4.58 per bushel compared to $4.40 per bushel for sorghum. These may be important considerations for farmers facing persistent drought conditions that may extend into the 2021 crop year, he said.
“I think we are going to see an increase in grain acres overall, and I think this is a year that we might see sorghum overtake corn in acres planted,” he said. “There are really high cotton prices as well, and we’ve seen that be the crop option preference for a lot of producers in recent years as cotton prices got hot and grain prices were not.”
What follows wheat?
The condition of the Texas wheat crop will also play a role in the acres for corn, sorghum and cotton. For wheat damaged by Winter Storm Uri, especially in areas experiencing increasingly dry conditions, producers could terminate wheat acres early, hope for rain and follow with corn, sorghum or cotton.
“With these prices, there could be a lot of double cropping, which is taking wheat to grain, graze out or forage, and following with a summer crop, if there is time and moisture,” he said. “Sorghum is also a popular choice as a replant option in years in which cotton fields are lost to early season storms.”
It’s still early, but Welch said he would not be surprised if the U.S. sorghum crop jumped from the 6 million acres planted in 2020 to 8 million acres this growing season when considering the various factors. Texas and Kansas account for the vast majority of sorghum acres. But heavy increases to supplies could negatively impact prices even if demand remains strong.
The USDA survey that provides preliminary estimates for crop acres comes out March 31 and might present a better picture of plantings. But Mother Nature could be a major factor with big swaths of grain producing areas in Texas and Kansas experiencing various levels of drought.
“If there is a huge crop, sorghum will rely on exports to maintain the price premium to corn and there might be some reduction, but it looks like it will likely trade right alongside corn and overall strong grain prices,” he said. “We’ll have a better idea about crop potential if we see some good rain events at and after planting, and we’ll have a better idea about prices in June and early July when southern Texas sorghum is cut and enters the market.”
Local