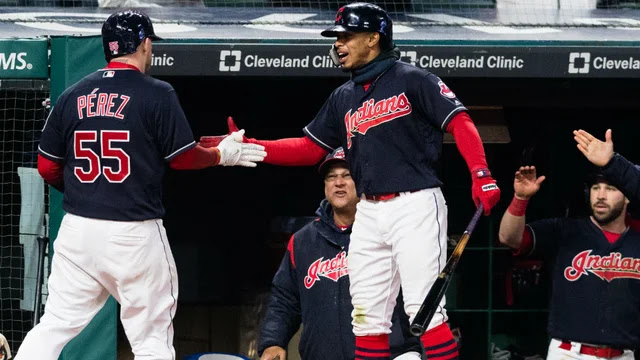 The Cleveland Indians on Wednesday banned headdresses and painted faces at games, just days before the MLB team's home opener.
The new Progressive Field policy prohibits “abusive or inappropriate language or conduct deemed disorderly, unruly or disruptive including inappropriate dress,” including headdresses and face paint “styled in a way that references or appropriates American Indian cultures or traditions,” the team announced in a statement.
Violations of this new policy, the team added, can lead to ejection from the game or refusal of admission.
Fans, however, are still permitted to wear hats and clothing featuring Chief Wahoo, the team's mascot, according to The Associated Press. The team removed the caricature of Chief Wahoo from its game jerseys and caps two years ago, but still sells merchandise featuring the logo.
The Indians’ home opener is on Monday, when they are scheduled to take on the Kansas City Royals at Progressive Field after facing the Lions in Detroit for a three-game series starting on Thursday.
In August, the Kansas City Chiefs instituted a similar policy, banning fans from wearing headdresses and certain face paint.
This news comes after the team announced in December that it would begin the process of changing the team name “Indians,” writing that after looking into the effect the name has on different constituencies, “we have decided to move forward with changing the current team name and determining a new, non-Native American based name for the franchise,” according to a press release from the MLB.
In July 2020, Washington’s NFL team announced that it would now call itself the “Washington Football Team,” as it worked to adopt a new, permanent name to replace what was formerly the Redskins.
National