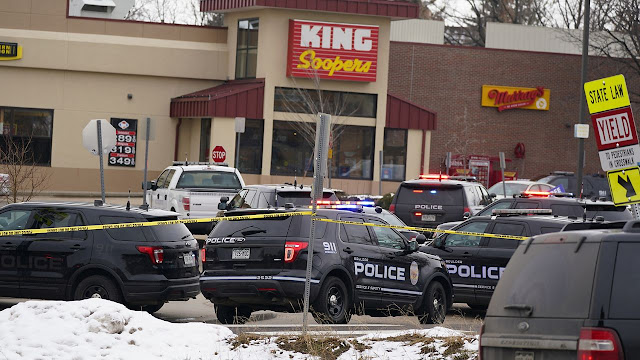 Police have charged a suspect in the Boulder, Colo., supermarket shooting with 10 counts of first-degree murder in an attack that left 10 people dead on Monday, including a police officer.
Police identified 21-year-old Ahmad Al Aliwi Alissa from Arvada, Colo., as the suspect in the shooting at the King Soopers grocery store during a Tuesday during a press conference.
Boulder Police Chief Maris Herold said officers responded within minutes of the shooting and exchanged gunfire with the man, who was taken into custody shortly before 3:30 p.m. MDT. The suspect was transported to the hospital with a leg injury and was in stable condition, she said.
Herold read the names of the nine previously unidentified victims, who ranged in age from 20 to 65: Denny Strong, 20; Neven Stanisic, 23; Rikki Olds, 25; Tralona Bartkowiak, 49; Suzanne Fountain, 59; Teri Leiker, 51; Kevin Mahoney, 61; Lynn Murray, 62; and Jody Waters, 65.
The chief said all the victims' families were notified by early Tuesday morning. The list included Boulder Police Officer Eric Talley, who was the first officer to arrive on the scene and who was killed during the exchange of gunfire with the suspect. He had been on the force since 2010.
“He was by all accounts one of the outstanding officers of the Boulder Police Department, and his life was cut too short,” Boulder County District Attorney Michael Dougherty said at the briefing.
Police have not yet determined a motive for the shooting.
The suspect, who Dougherty said "lived most of his life in the United States," was expected to be released from the hospital later Tuesday and booked into county jail. The investigation was in its early stages, the district attorney added.
Gov. Jared Polis said during the briefing that his "heart aches" in the aftermath of the attack in Boulder, home to the University of Colorado.
“Of course I’m standing here, not just as governor, but as someone who has called this community my home for most of my whole life and who has shopped at that King Soopers in Table Mesa many times across my life,” he said.
“We will hold the evildoer responsible to the full extent of the law for his actions, and we will always remember the victims of the King Soopers shooting," the governor added.
Rep. Joe Neguse (D-Colo.) said the Boulder community was "upturned by a senseless act of violence," saying that mass shootings cannot be the "new normal."
“In this year of separation due to COVID, of loss and of loneliness, grocery stores like King Soopers have been one of our consistent gathering places, one of the few routine activities that we’ve continued to engage in as Coloradans and as Americans,” Neguse said. “It’s hard to describe what it means for this safe place to see a horrible tragedy like this unfold.”
A live television feed from Monday appeared to show police escorting a handcuffed and partially naked man with a bloody leg away from the scene.
The shooting took place days after a gunman attacked three spas in and around Atlanta on March 16, resulting in the deaths of eight people, including six women of Asian descent.
Senate Majority Leader Charles Schumer (D-N.Y.) has vowed to push for measures addressing gun violence and Judiciary Chairman Dick Durbin (D-Ill.) has called for gun reform, including stricter background checks, following the shootings.
National