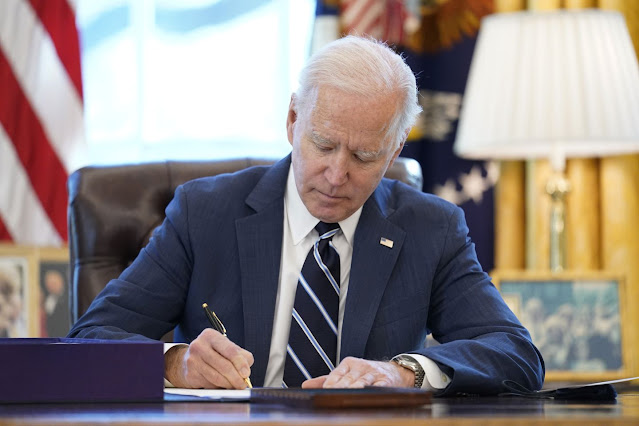 President Biden on Thursday signed his $1.9 trillion coronavirus rescue package into law, marking a significant legislative accomplishment for the new president as he looks to shepherd the country through the pandemic.
Biden, who signed the bill alongside Vice President Harris in the Oval Office, characterized the measure as historic legislation aimed at “rebuilding the backbone of this country.”
“In the weeks that this bill has been discussed and debated, it is clear that an overwhelming percentage of the American people … have made it clear they strongly support the American Rescue Plan,” Biden said in brief remarks before signing the bill. “Their voices were heard.”
Biden signed the bill without taking questions. He is scheduled to deliver a prime-time address later Thursday about the administration's pandemic response.
The sweeping bill, which Biden proposed in January before taking office, includes funding for $1,400 direct payments to most Americans, vaccine distribution efforts, school reopenings, enhanced unemployment benefits through September as well as state and local governments, along with an expansion of the child tax credit and an expansion of ObamaCare, among other provisions.
The bill signing was originally planned for Friday afternoon, but was moved up a day after the bill arrived at the White House following the House vote on Wednesday.
White House chief of staff Ron Klain tweeted that the administration would still hold a celebration of the bill’s passage with congressional leaders on Friday. It’s unclear precisely who will attend, but the ceremony is not expected to include GOP lawmakers.
White House press secretary Jen Psaki told reporters at a briefing Thursday that the event would include members from the House and Senate but would not be bipartisan. She said the administration is “still finalizing the list of attendees.”
No Republicans supported the bill in the House or Senate, and only one Democrat voted against it in the House.
The Biden administration will begin an all-out public relations blitz in the weeks to come to tout the benefits of the bill. The president will travel to Pennsylvania next Tuesday in what is expected to be the first of multiple trips to sell the legislation to the public and ensure it retains its popularity. Biden and Harris will also travel to Atlanta on Friday, the White House announced shortly before Biden signed the bill, branding the effort the “Help is Here” tour.
The Biden administration is under pressure to implement the bill to get relief to American businesses and families as quickly as possible. Biden is expected to name a person to coordinate the implementation of the package, while Cabinet officials like Treasury Secretary Janet Yellen and Education Secretary Miguel Cardona play significant roles.
The White House says it expects many Americans to receive their direct payments by the end of March.
Psaki said that Americans “can expect to start seeing direct deposits hit their bank accounts as early as this weekend” but said payments would continue over the “next several weeks.”
Biden’s remarks on Thursday evening will mark the one-year anniversary of the coronavirus shutdowns in the United States. He is expected to talk about the sacrifices made by the American public, the lives lost and his administration’s efforts to distribute coronavirus vaccines.
The president also plans to “lay out the next steps he will take to get the pandemic under control, level with the American people about what is still required to defeat the virus and provide a hopeful vision of what is possible if we all come together,” according to a White House official.
National