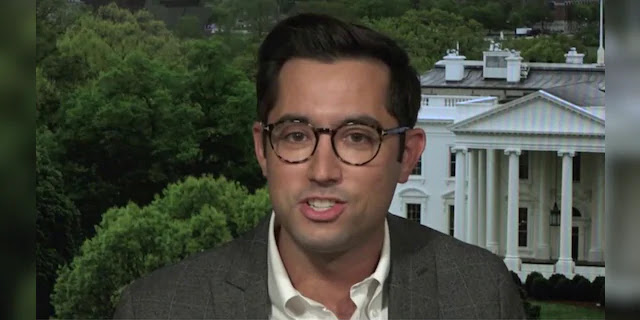 Deputy White House press secretary TJ Ducklo has been suspended for one week after he harassed and threatened a Politico journalist who was pursuing a story about his romantic involvement with another reporter.
Vanity Fair reported that Ducklo responded angrily during an off-the-record call with Politico's Tara Palmeri when she was reporting on his relationship with Alexi McCammond, an Axios reporter who met Ducklo while covering the Biden campaign.
“I will destroy you,” Ducklo reportedly told Palmeri on the call, during which he also made misogynistic comments and suggested she was "jealous" that an unidentified man was interested in McCammond and not her.
"TJ Ducklo has apologized to the reporter, with whom he had a heated conversation about his personal life. He is the first to acknowledge this is not the standard of behavior set out by the President," White House press secretary Jen Psaki said in a statement after the Vanity Fair report was published.
"In addition to his initial apology, he has sent the reporter a personal note expressing his profound regret. With the approval of the White House Chief of Staff, he has been placed on a one-week suspension without pay," she added. "In addition, when he returns, he will no longer be assigned to work with any reporters at Politico."
News of Ducklo's relationship with McCammond was made public over the weekend in a piece in People Magazine. The two met during the campaign, and McCammond has since been moved off of covering the Biden White House to avoid a conflict of interest, the piece said.
Politico reported in Playbook earlier in the week that the publication had reached out to the White House about the story weeks before the People story was published.
The Vanity Fair story published Friday provided new details about the process, however. The outlet reported that Ducklo sought to intimidate Palmeri to try and kill the story.
When a Politico editor reached out to the White House about the comments, Psaki, White House communications director Kate Bedingfield and senior adviser Anita Dunn acknowledged Ducklo had acted inappropriately, but questioned why Palmeri had disclosed the contents of an off-the-record call.
Ducklo's behavior has drawn particular scrutiny given comments President Biden made on his first day in office, warning staffers and appointees that they would be expected to treat others with respect.
"I’m not joking when I say this: If you’re ever working with me and I hear you treat another colleague with disrespect or talk down to someone, I promise you, I will fire you on the spot — on the spot. No ifs ands or buts," Biden said during a virtual swearing-in ceremony on Inauguration Day.
"Everybody is entitled to be treated with decency and dignity," he said. "That’s been missing in a big way the last four years."
National