US triggers sanctions on Myanmar by calling military takeover a coup 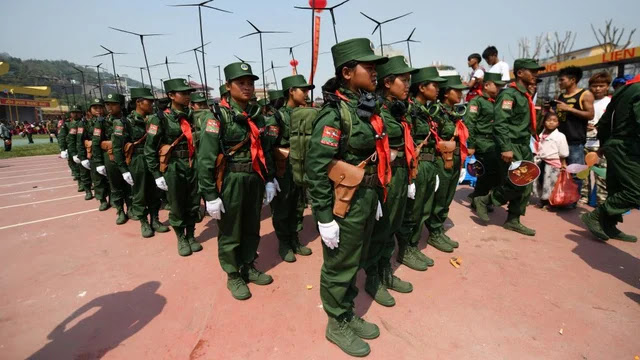 The Biden administration declared on Tuesday that the military takeover of the government in Myanmar was a coup, triggering sanctions and a review of U.S. assistance to the country.
President Biden and senior administration officials had earlier condemned the military takeover that occurred Monday morning but refrained from immediately calling it a coup.
A State Department official said the designation was made following a review of Monday's events, when the military in Myanmar instituted a state of emergency and arrested democratically elected officials who were set to open the first parliamentary session following the November election.
The military had called the November elections fraudulent despite local and international observers saying they were largely free and fair.
The arrests on Monday included Aung San Suu Kyi, a Nobel laureate and leader of the ruling party, the National League for Democracy. President Win Myint was among the other officials apprehended by the military.
The State Department official said Tuesday that the elected government in Myanmar, also referred to as Burma, was deposed in a coup d'état.
“We continue to call on the Burmese military leadership to release them, and other detainees [from] civil society and political leaders immediately and unconditionally,” the official said.
The coup designation triggers certain restrictions on foreign assistance to Myanmar and directs the State Department to initiate a broader review of assistance programs to the country, the official said.
The U.S. lifted a broad set of sanctions against Myanmar in 2016 in support of the government's steps towards democracy, but maintains targeted sanctions against officials found to have engaged in human rights abuses and corruption.
Those officials include senior military commanders like General Min Aung Hlaing, who took over as head of the government with this week's coup. He was blacklisted by the U.S. in 2019, along with three other top military commanders, for his role in the ethnic cleansing of the Muslim-minority Rohingya population in 2017.
Most of the U.S. assistance to Myanmar, an estimated $108.65 million requested for 2021, goes to civil society organizations and humanitarian assistance. The State Department official said that very little of that assistance, “almost none,” goes to the government of Myanmar.
Humanitarian assistance will not be affected by the sanctions, the official added, in particular assistance to support the Rohingya.
The U.S. is has been in contact with allies like Japan and India over the situation in Myanmar as part of its efforts calling for the release of detained government officials, but has not been in direct contact with military leaders in Myanmar.
“We have certainly been in frequent contact with our like-minded allies and partners in the region ... Japan and India,” the official said. “We're having daily, ongoing conversations with them and we certainly appreciate that some other countries have better contact with Burmese military than we do, so we're continuing those conversations.”
World