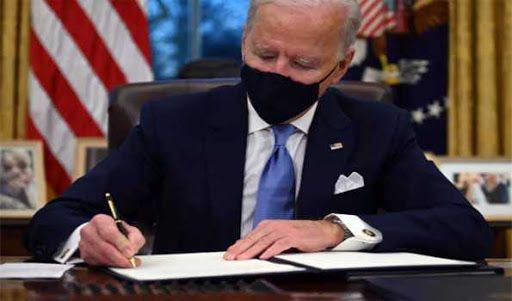 The U.S. on Friday officially rejoined the Paris climate agreement, Secretary of State Antony Blinken said in a statement.
On his first day in office, President Biden signed an executive order that set the country on track to rejoin the global accord, but it took 30 days for the country to formally re-enter.
“Climate change and science diplomacy can never again be ‘add-ons’ in our foreign policy discussions,” Blinken said in the statement. “Addressing the real threats from climate change and listening to our scientists is at the center of our domestic and foreign policy priorities.”
Under the Paris deal, the world’s countries agree to attempt to limit the planet’s warming to less than 2 degrees Celsius below pre-industrial levels, with the further goal of limiting warming to 1.5 degrees.
The Trump administration pulled the U.S. out of the agreement, arguing that it was burdensome for business and workers.
But Biden has stressed that he sees an opportunity for jobs as the country moves toward clean energy. He has also argued that climate change is among several crises the country currently faces.
Special envoy John Kerry will be leading much of the administration's climate diplomacy, including at a United Nations conference set for November in Scotland, where countries will formally adopt more stringent climate commitments.
Former President Obama set the goal of reducing the U.S. emissions by between 26 and 28 percent compared to 2005 levels by 2025.
The U.S. has not increased its commitments since Obama joined the agreement, while other countries have set more ambitious goals.
The United Kingdom and the European Union have said they would reduce their emissions by 68 percent and 40 percent, respectively, below 1990 levels by 2030.
Biden administration officials have said that they will announce updated goals before a summit on Earth Day this year.
World