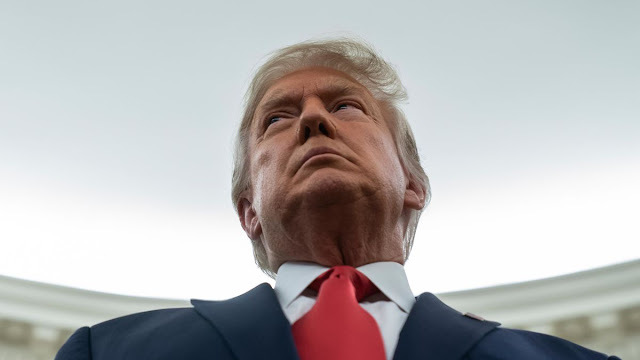 The leadership PAC created by former President Trump in the wake of his November electoral loss raked in nearly $31 million in the final weeks of 2020, giving him a stockpile of cash that could help him retain influence over the GOP in his post-presidency.
The PAC, called Save America, reported raising $30.9 million in the end-of-year period spanning Nov. 24-Dec. 31, according to new filings with the Federal Election Commission (FEC). In that time, it spent only a fraction of what it brought in, doling out less than $218,000 on merchant fees for the GOP’s online fundraising clearinghouse WinRed.
Save America entered 2021 with nearly $31.2 million in the bank.
The filings with the FEC show how money flowed into Trump’s new political operation as he and his allies continued to spread false and misleading claims that the 2020 presidential election had been marred by widespread voter fraud and systemic irregularities.
Throughout that time, Trump, his aides and other conservative activists waged a high-profile legal and pressure campaign in an effort to overturn President Biden’s victory.
The push to toss out the election results culminated last month with a rally outside the White House that devolved into a violent insurrection by Trump’s supporters at the U.S. Capitol.
Trump’s challenges to the election results and the resulting riot at the Capitol have divided Republicans, some of whom are pushing the GOP to move on from Trump and his brand of conservative populism as it looks to recapture majorities in the House and Senate in 2022 and the White House in 2024.
Trump is said to be considering another bid for the White House in 2024. And while the leadership PAC money cannot be used to fund a possible campaign, it’s a powerful tool to help him maintain sway over Republican candidates in the 2022 midterms.
But the money pouring into Trump’s political operation, much of it from grassroots donors, is a sign of the fervent support the former president retains among the Republican Party’s base voters and suggests that he could yield both financial and political influence over the party in the coming years.
The money amassed by Save America in the final fundraising period of 2020 represents only a small part of Trump’s political finances.
The Trump Make America Great Again Committee, a joint fundraising operation affiliated with the former president, reported raising $62.6 million in the final five weeks of 2020. That group is splitting its donations between the Republican National Committee (RNC) and Save America, with the majority of its contributions going to Trump’s leadership PAC.
The joint fundraising committee transferred nearly $78.4 million to the RNC and Trump’s political operations, according to FEC filings, including $30.5 million to Save America and $25.5 million to the Trump campaign.
Even after those transfers, the Trump Make America Great Again Committee reported entering 2021 with nearly $60 million on hand.
The Trump campaign itself raised some $27 million in late November and December as the now-former president pushed to overturn the results of the election. The campaign’s spending, however, shows how he treated his efforts more as a public relations battle than a legal one.
The Trump campaign’s largest expenses in the last five weeks of 2020 were for advertising. The campaign paid nearly $5 million to Harris Sikes Media, a limited liability company that the former president has used to place ad buys. The Trump campaign also made a $4.4 million payment to American Made Media Consultants for online advertising.
The Trump campaign spent significantly more on advertising and fundraising as he sought to overturn the election results than he did on legal services. In all, the campaign dropped about $10 million on lawyers and legal costs, a not-insignificant amount but one that still pales in comparison to his public relations-related spending.
The Democratic National Committee (DNC), meanwhile, is beginning 2021 in a much stronger financial position than it was a year ago. The group entered the new year with nearly $38.8 million in the bank. By comparison, the DNC reported having only about $10.1 million in cash on hand heading into 2020.
Adding to the DNC’s coffers is more than $40 million earmarked for the party left over from its joint fundraising committee with the Biden campaign, The New York Times reported on Sunday. The DNC reported only about $3 million in debt, only about half as much as it owed at the beginning of 2020.
The recent selection of Jaime Harrison as the DNC’s new chairman has also raised Democrats’ fundraising hopes. Harrison, a former South Carolina Democratic Party chairman, rose to national prominence last year during his Senate bid against Sen. Lindsey Graham (R-S.C.).
Harrison’s campaign was ultimately unsuccessful, with Graham winning reelection by a 10-point margin. But Harrison was still able to shatter fundraising records, pulling in more than $100 million for his Senate bid, a fact that has buoyed Democratic hopes of flooding the once-cash-strapped party with new money.
National