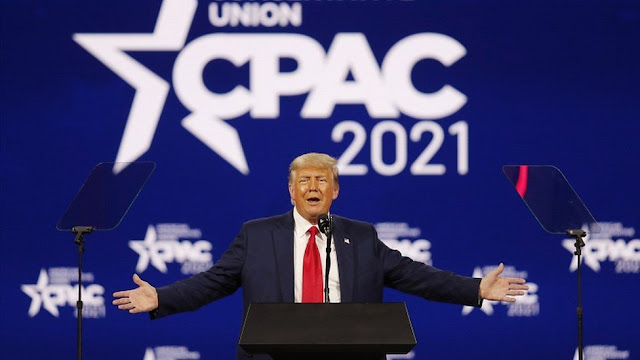 Former President Trump won the Conservative Political Action Conference (CPAC) straw poll on Sunday, with 55 percent of respondents saying they would vote for him in a hypothetical 2024 primary.
In the straw poll that demonstrated Trump's hold on the GOP, 21 percent said they’d vote for Florida Gov. Ron DeSantis (R) and 4 percent said they’d go with South Dakota Gov. Kristi Noem (R).
Almost 7 in 10 of the poll’s participants said they would like to see Trump run for president in 2024, compared with 15 percent who said they would not and 17 percent who said they were unsure.
Ninety-five percent said they want the Republican Party to continue with Trump’s agenda and policies, with 3 percent saying the GOP should change direction and 2 percent saying they were uncertain.
The CPAC straw poll also asked respondents who they would support for president in a theoretical race if Trump was not a candidate. The results showed DeSantis with a wide lead at 43 percent support.
In that race, Noem came behind the Florida governor at 11 percent, followed by Donald Trump Jr. at 8 percent and former Secretary of State Mike Pompeo and Sen. Ted Cruz (R-Texas) both at 7 percent.
“So again you see how important to everybody here — the grassroots, the base of the conservative movement, the base of the Republican Party — it is either President Trump or a Trump candidate,” pollster Jim McLaughlin, who announced the poll’s results at CPAC, said.
The poll ended up recording a 97 percent approval rating for Trump's job performance, including 87 percent who strongly approved.
McLaughlin declared the outcome of the poll just before the former president’s anticipated speech at CPAC.
The speech is his first major appearance since he was replaced as president and comes as Trump aims to hold on to his leadership role in the GOP following his second impeachment after the Capitol riot.
Despite public fractures in the party over the past few weeks, Republicans sought to show the GOP united during CPAC.
National