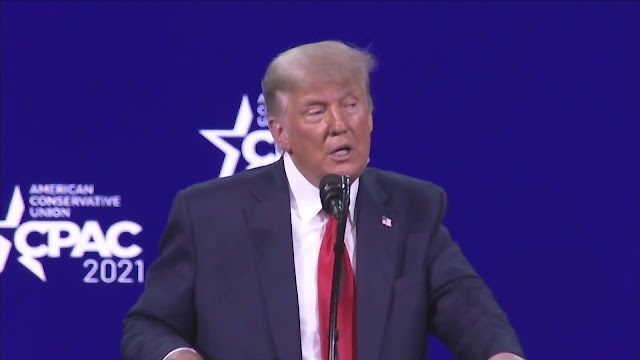 Former President Trump teased another possible presidential campaign on Sunday during his speech at the Conservative Political Action Conference (CPAC) while repeating his false claim that he won the 2020 election.
In his first major public appearance since leaving the White House, Trump predicted that the Democratic Party will endure “withering losses” in the midterm elections and will “decisively” lose the White House in 2024.
The former president repeated his unfounded claims that widespread fraud led to President Biden’s 2020 election win by falsely declaring during his speech that, "actually, as you know they just lost the White House.”
“But who knows, I may even decide to beat them for a third time,” he said, prompting cheers from the crowd at the conference.
Trump used his speech to slam the Biden administration’s first month in office as “the most disastrous,” particularly criticizing Biden's efforts to reverse Trump’s immigration policies.
The former president’s much-anticipated speech comes after conference speakers praised Trump over the past few days. It also followed the announced results of the CPAC straw poll that determined 55 percent of participants would back Trump in a 2024 presidential run.
Trump had intended to use his speech to solidify his leadership role in the Republican Party after his second impeachment led several GOP lawmakers to break with the former president.
The House impeached Trump with a week left in his presidency on an allegation that he incited the riot at the Capitol. The Senate later dismissed the charge, although seven GOP senators voted to convict the former president in the most bipartisan Senate impeachment trial vote in American history.
National