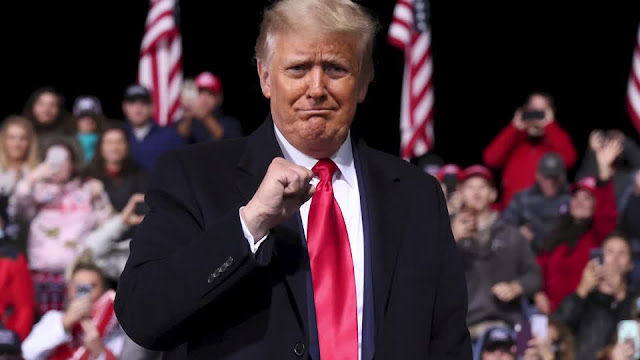 Former President Trump is looking to cement his hold on the Republican Party as he makes his first major post-presidential appearance at the Conservative Political Action Conference (CPAC) in Orlando on Sunday.
Trump is expected to deliver a speech tearing into President Biden while reasserting himself as the Republican Party’s undisputed leader.
His appearance comes as the party aims to smooth over internal rifts heading into the 2022 midterms, where it hopes to reclaim the House and Senate majorities.
Democrats have a small majority in the House and each party holds 50 seats in the Senate, putting both chambers in reach for Republicans in a midterm when an incumbent president’s party historically has lost seats.
Yet Trump serves as the ultimate question mark on the proceedings.
Hugely popular within the GOP, Trump would be the odds-on favorite to win his party’s nomination if he runs for it in 2024.
Yet he also drives opponents to vote in droves against him, something evidenced by the record number of votes won by Biden in 2020, and in the GOP’s loss of the House majority in 2018.
In next year’s midterms, it is unclear whether voters will savor or turn away from the prospect of a Trump-led GOP winning back congressional majorities, particularly with the memories of the ugly Capitol riot still fresh.
Fifty-nine percent of GOP voters said that Trump should play a “major role” within the party going forward, while 54 percent said they would back the former president in a hypothetical 2024 Republican primary, according to a Morning Consult/Politico poll released last week.
Sen. Mitt Romney (Utah), one of Trump’s staunchest GOP critics, said this week that Trump could coast to victory in a 2024 primary.
“I expect he will continue playing a role. I don’t know if he’ll run in 2024 or not. But if he does, I’m pretty sure he will win the nomination,” Romney told the New York Times-Deal Book.
At CPAC, Trump will be speaking to the faithful. On Friday, a golden statue of the former president was literally rolled out. Attendees booed and shouted “freedom” when they were asked to wear masks to prevent the spread of the coronavirus, and to meet the hosting hotel’s rules.
A number of speakers at CPAC are continuing to question the legality and validity of November’s general election just months after Trump repeatedly and falsely said widespread fraud caused the election to be stolen from him.
Many expect Trump to sound a similar note on Sunday.
“Trump’s remarks come down to three things: ‘I’ve won, Biden’s terrible, and I might run again,’ ” said Republican strategist Doug Heye, who is a vocal critic of Trump. “On that third part, he won’t definitively answer.”
Trump has been banned from Twitter and has been relatively quiet, just giving a few interviews in the last two weeks that were focused on the death of Rush Limbaugh and the car accident that severely injured Tiger Woods.
As a result, Sunday’s address will be a return to the political spotlight for a former president who once had the lights almost all to himself.
There are other Republicans trying to grab the limelight, including Sen. Tom Cotton (Ark.), Florida Gov. Ron DeSantis and Texas Sen. Ted Cruz.
All three could be 2024 presidential contenders, though all three are also much less likely to enter the race if Trump is a contender.
DeSantis on Friday touted his handling of the coronavirus pandemic, which has been widely praised by conservatives. He also hit the GOP’s pre-Trump establishment class, echoing the former president’s rhetoric.
“We cannot, we will not, go back to the days of the failed Republican establishment of yesteryear,” he said. “We reject open borders and instead support American sovereignty and the American worker. Building a movement on amnesty and cheap foreign labor is like building a house on a field of quicksand.”
But while DeSantis and other speakers used the opportunity to cast themselves as potential successors to Trump, they likely understand that they are very much still on the former president’s turf.
“Everyone else who has their eye on 2024 knows Trump goes first. He’s either going to make a decision to run or doesn’t, and in that sense they are all playing second fiddle to Trump,” said one Republican strategist.
Political watchers are also paying attention to the conservatives who were absent at the conference. House GOP Conference Chairwoman Liz Cheney (Wyo.), who spoke at CPAC last year, notably is not in attendance this year.
Cheney garnered the wrath of pro-Trump conservatives last month when she voted to impeach him for inciting the violent insurrection at the Capitol last month. She since has been censured by the Wyoming Republican Party and has gotten a primary challenger.
Cheney has signaled she will not stop criticizing Trump, clashing with House Minority Leader Kevin McCarthy (R-Calif.) this week over whether Trump should even address the conservative body.
“I’ve been clear about my views about President Trump and the extent to which, following Jan. 6, I don’t think he should be playing a role in the future of party,” Cheney said on Wednesday before McCarthy abruptly ended the press conference.
Pro-Trump operatives are quick to point out that it would be an uphill climb for the former president’s critics to make a play for the party’s grassroots due to his widespread popularity among the group.
“A lot of the elites in the Republican Party, meaning the Romney’s, the Cheney’s, etc, don’t seem to understand that you can get a new set of elites, but you can’t get a new set of grassroots and if you don’t listen to your grassroots, then you’re going to fail as a party,” the Republican strategist said.
Political watchers are in agreement that Trump will hold back no punches against his Democratic or Republican critics when he speaks Sunday.
“Will Donald Trump ever miss an opportunity to attack someone? No,” Heye said.
National