Trump reemerges to legacy being erased by Biden 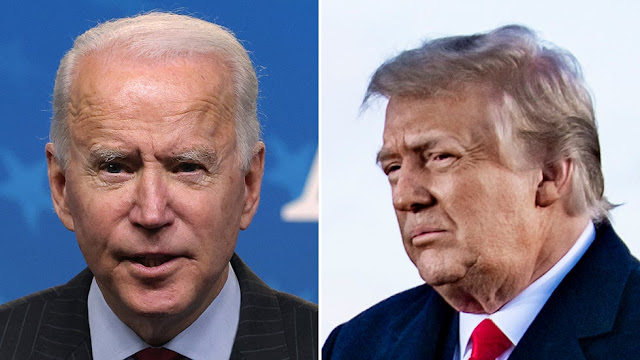 President Biden has spent his first five weeks in office peeling back his predecessor's legacy, one executive action at a time. On Sunday, former President Donald Trump will take his first opportunity to respond.
Biden moved on his first day in office to rejoin the Paris Climate Accords, cut off funding for the border wall, reverse Trump’s travel ban and recommit to the World Health Organization. And the president’s rhetoric is regularly filled with swipes at Trump’s bungled handling of the coronavirus pandemic and his inability to be transparent with the public.
Trump’s first media appearances since leaving office have been focused on national headlines involving the death of Rush Limbaugh and Tiger Woods’ serious car accident. But he is expected to return fire against Biden in a speech Sunday at the Conservative Political Action Conference (CPAC).
“Joe Biden's dangerous first month failures will feature prominently in Sunday's speech,” said Jason Miller, a senior adviser to Trump.
Immigration is expected to be among the dominant topics of the address, according to people familiar with the planning. Trump is likely to seize on the influx of migrants at the southern border, which has prompted the Biden administration to reopen a facility for teenagers in Texas that operated for a month during the previous administration.
That decision has drawn fire from all sides, with liberals decrying the use of the facilities to house young migrants, and conservatives complaining that Biden's policies are drawing immigrants to the border amid the pandemic.
Trump’s appearance at CPAC comes as former Trump officials slowly ramp up their visibility and criticism of the Biden administration’s policies.
Former Vice President Mike Pence met this week with members of the Republican Study Committee for roughly two hours to discuss the conservative agenda moving forward.
Pence, who Trump attacked during the Jan. 6 riots at the Capitol even as the then-vice president was being whisked to safety, told lawmakers he has a strong relationship with Trump and plans to defend the administration's record. Pence is expected to record a regular podcast through the Young America’s Foundation.
Stephen Miller, a former senior adviser in the Trump White House who was a speechwriter and the architect of the former president’s immigration agenda, also met with committee members this week.
Miller, who only occasionally appeared on television during the Trump administration, has been something of a regular presence on Fox News since Biden took office.
But nobody in the Republican Party draws attention like Trump, and all eyes in the political world will be on his address on Sunday.
The Biden administration's early policy moves have largely been aimed at undoing Trump's actions and addressing what they argue were shortcomings left by the previous administration in vaccine distribution.
In addition to day one executive orders, Biden has established a task force to reunite families separated during the Trump administration and rescinded the ban on transgender troops serving in the military.
On Wednesday, Biden issued an executive order that undid a series of Trump actions, including ones that established new guidelines for federal architecture, outlined new regulatory guidance during the pandemic and ordered a review of funding for so-called “anarchist” cities that saw protests last summer.
Despite the focus on dismantling Trump’s policies and the tendency to blame him for initial issues with the vaccine rollout, the White House has been adamant that it will not take the bait when the former president speaks.
Biden said in a CNN town hall earlier this month that he was tired of discussing Trump. And press secretary Jen Psaki has repeatedly fended off questions about how the White House might engage with the former president.
Psaki on Tuesday referred to Trump's upcoming speech at CPAC as a “performance,” and on Thursday she said any upcoming commentary from the former president on immigration would be of little use to the current administration.
“We’re not looking to former President Trump or any of his advisers for how we’re approaching immigration,” she said Thursday. “In fact, we’re in the circumstance we’re in because not only was their approach inhumane, it was ineffective.”
“We’ll see what he says,” she added. “But our focus is certainly not on what President Trump is saying at CPAC.”
National