Trump lashes out after Supreme Court decision on his financial records 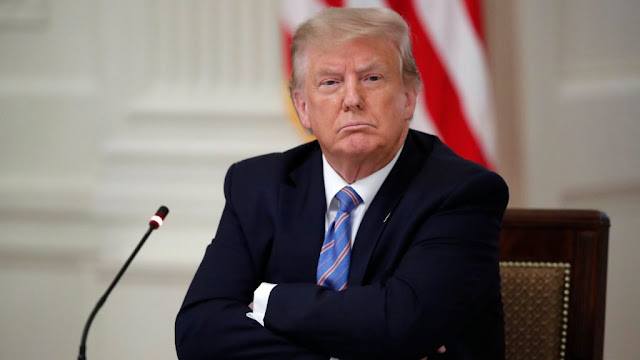 Former President Trump on Monday lashed out after the Supreme Court declined to block the Manhattan district attorney from obtaining his financial records, blasting the probe as politically motivated and pledging to "fight on."
"The Supreme Court never should have let this 'fishing expedition' happen, but they did," Trump said in a statement. "This is something which has never happened to a President before, it is all Democrat-inspired in a totally Democrat location, New York City and State, completely controlled and dominated by a heavily reported enemy of mine, Governor Andrew Cuomo."
Trump described the Manhattan investigation into his financial dealings as a continuation of "the greatest political Witch Hunt in the history of our Country," referring broadly to repeated investigations into his alleged wrongdoing.
"I will fight on, just as I have, for the last five years (even before I was successfully elected), despite all of the election crimes that were committed against me," Trump added. "We will win!"
The Supreme Court earlier Monday declined to block Trump's financial records after the former president filed a request in October after losing several rounds in the lower courts in his fight against Manhattan District Attorney Cyrus Vance Jr. The justices issued the order issued without comment or noted dissents.
Vance's office has sought Trump's records since 2019, when a New York grand jury issued a subpoena to Trump's accounting firm, Mazars USA, for eight years of the former president's personal and business tax returns and other financial records.
Vance's office is looking into payments made to silence two women who allege they had affairs with Trump, including adult-film star Stormy Daniels. Trump’s former attorney and fixer Michael Cohen, who pleaded guilty to bank fraud, tax fraud and campaign finance law violations, has said the payments were made in order to influence the outcome of the 2016 presidential election.
Additionally, Vance’s office has said its subpoena is part of an investigation into possible financial crimes by the Trump Organization.
Trump's statement responding to the ruling bemoaned the practice of "headhunting" among prosecutors and attorneys general, in which they target political figures in the other party and campaign on a promise to do so.
"That’s fascism, not justice—and that is exactly what they are trying to do with respect to me, except that the people of our Country won’t stand for it," Trump said in the statement.
The former president drew criticism himself for urging officials to look into his political opponents. Trump was impeached for urging the Ukrainian president to investigate the Bidens, and he expressed frustration that former Attorney General William Barr did not announce investigations into election fraud or the Bidens around the time of the 2020 election.
Trump also used the statement to again push the false claim that he won the 2020 election, which has been repeatedly debunked by the courts, state elections officials and federal lawmakers in both parties.
National