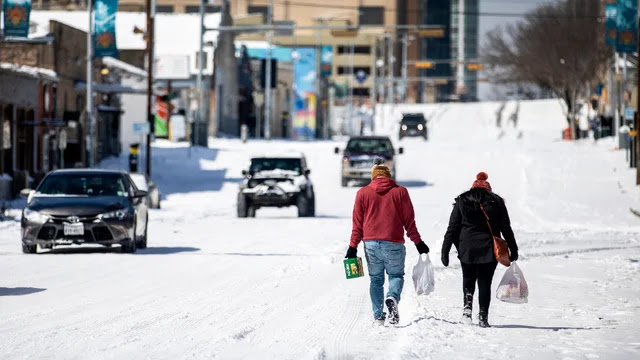 Officials in Texas are under fire for their handling of the massive winter storm that swept across the state over the weekend, leading to widespread power outages that have impacted over two million Texans.
Critics took to social media on Tuesday to air their grievances with officials, accusing them of being underprepared for the unusually harsh winter weather conditions in the Lone Star State.
"The lack of preparation by officials and power companies in my home state is the height of negligence," MLB host and Texas native Robert Flores tweeted. "F——— pathetic."
The state's energy and government officials are facing intense scrutiny as millions of Texans are left without power and face unusually cold temperatures in the single and negative digits. At least 11 people have been killed as a result of the winter storm, including a woman and girl, who died as a result of carbon monoxide poisoning after sheltering in their car in a garage to keep warm, according to CBS News.
"Texas likes to promote that it’s an energy-producing state. Tonight, power companies here can’t provide enough energy to keep heaters on in a winter storm," CBS News correspondent and Texas native Omar Villafranca tweeted on Monday evening.
On Monday, Villafranca drew attention to angry replies from residents to a tweet from Oncor, a Texas electricity company, which said it has been directed by the Electric Reliability Council of Texas [ERCOT] to drop the power load through maintained controlled outages.
"An update from a Plano resident that has had about 3 hours of power in the last 24 hours. It's 45 degrees in my home and during the night my I watched my husband crawl around to each of my kids to make sure they were still breathing," one user tweeted.
Other Twitter users called for an investigation into the matter.
Oncor urged customers to prepare for extended power outages on Monday, saying “at this time, ERCOT is unable to predict when grid conditions will stabilize.”
Meanwhile, Texas Gov. Greg Abbott (R) also faced backlash for his handling of the storm, with critics questioning his administration's preparedness.
"This cold front was forecast days ago. What preparation was done ahead of time, @GregAbbott_TX?" CNN analyst Bianna Golodryga tweeted.
Abbott has laid blame on the state's private energy companies.
"There's a separate part of the system that is not working right now, and those are the private companies that generate the power that goes into ERCOT. And it's those private companies that generate power that are not working," Abbott told Houston's ABC affiliate.
"They were working up until about midnight last night, but after midnight, some of them literally froze up, and were incapable of providing power, and some are still incapable of providing power."
Texas