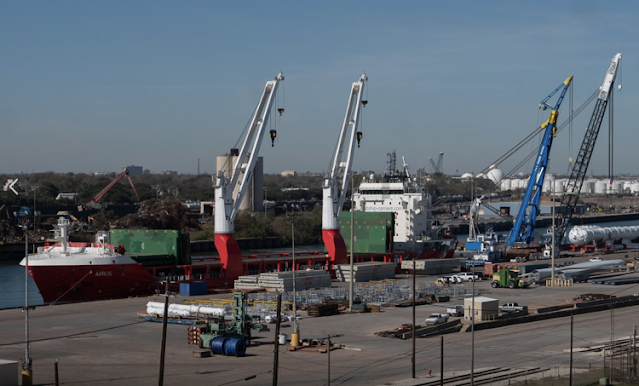 By Bethany Blankley
In 2020, Texas once again led the U.S. in exports, as it has every year since 2001, according to Census Bureau data.
Last year, Texas’s $279.3 billion worth of exports was greater than the combined worth of the three next largest exporting states: California, New York and Louisiana.
In 2020, California’s exports were worth $156 billion, New York’s worth $61.9 billion, and Louisiana’s $59.6 billion, according to Census data.
In 2019, Texas overtook Louisiana in becoming the number one state in maritime commerce by tonnage, with Houston becoming the tonnage leader among U.S. ports for the first time.
“Even during the coronavirus pandemic, Texas ports stayed in business – protecting jobs, bolstering the economy, and keeping shelves stocked with food and medical supplies for consumers,” the Texas Department of Transportation states.
One of Texas’ major thoroughfares for exports is its 11 deep draft ports. In 2019, the Texas port industry supported 1.8 million jobs and sustained $102 billion in personal income and local consumption. Texas ports also supported 597.5 million total tons of cargo and generated $7.8 billion in state and local tax revenue.
“Our essential workers are heroes. They have not missed a beat and show up every day to deliver commerce through our port,” Roger Guenther, executive director of Port Houston, said in a statement.
"Texas has developed a remarkable track record of economic achievement,” Robert Allen, president and CEO of the Texas Economic Development Corporation, said of Texas’ first place ranking.
"Texas is and has been the No. 1 exporting state in the nation, the best state business climate, and the world's ninth largest economy,” Allen added. “Even with all the challenges we faced in 2020, we are still outpacing the competition in exports – handily, I might add – that's a really good sign."
The U.S. Census Bureau ranked Texas as the top exporting state for the 19th consecutive year in 2020. Texas also led the nation in tech exports for the eighth year in a row, with $44.8 billion in exports. California’s $37.5 billion worth of tech exports ranked second.
According to new data released by the U.S. Bureau of Economic Analysis, state and local government shutdowns negatively impacted exports nationwide in 2020, but due to a combination of factors Texas still held strong.
"Those factors include Texas' pro-business climate of low taxes and reasonable regulations, its economic diversity, the second largest workforce in the nation, and its award-winning infrastructure – among many others," Allen said.
“Texas' strong record of economic strength – even during times of national recession – should be reassuring to corporate decision-makers considering Texas as the place to relocate or expand their businesses,” Allen added.
The top commodity exported from Texas is petroleum oil.
In December 2015, a 40-year ban on U.S. crude oil exports was removed, and Houston and Corpus Christi became the leading ports for U.S. crude oil exports.
Two Texas LNG facilities increased export capacity during the past few years, and an abundance of natural gas in Texas has driven investment in plastic resin, steel and chemical production, mostly near Texas ports with an intent to export the products, the state Department of Transportation notes.
Following crude oil exports, other top commodities include propane, civilian aircraft, natural gas, petrochemicals and machinery, among other chemicals and tech products, and Texas’ largest agricultural export – cotton.
Texas is the largest producer of cotton in the U.S., accounting for more than 45 percent of all cotton produced domestically. From 2015 to 2019, Texas cotton exports from maritime ports increased by 78 percent.
Texas