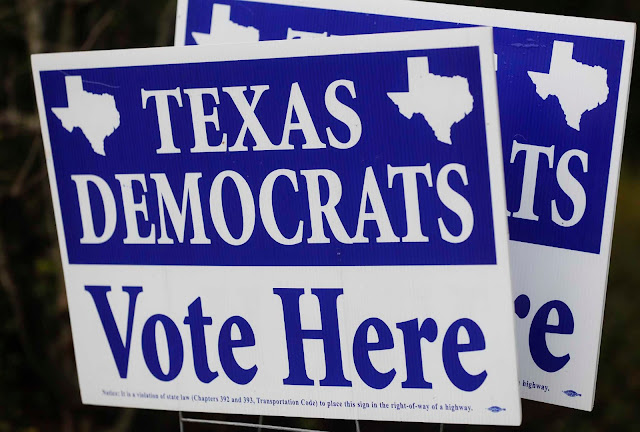 Texas Democrats placed a substantial amount of blame on the coronavirus pandemic for their losses in last year's general election, saying their inability to do in-person outreach severely hampered their efforts, according to a post-election report.
The report, released Monday, also faulted Democrats falling behind in both voter registration and turnout.
"We were beaten in the turnout battle across the state. Despite record turnout, our collective Get Out The Vote (“GOTV”) turnout operation did not activate Democratic voters to the same extent Republicans were able to activate their base," read the report, which was released Monday. "The pandemic prevented us from getting the most out of our most powerful competitive advantage: our volunteers. We struggled to reach voters for whom we did not have phone numbers, who were disproportionately young, rural and folks of color."
The party noted that they fell behind in the registration race when Republicans experienced a last-minute surge in registration.
"Despite more Democrats registering to vote than Republicans from 2018 to mid-2020, the late Republicans registration push accounted for roughly 87,900 net Republican votes, just from the final 3 months of voter registration," the report read.
The report also said that "Republicans did better in activating their base in Texas among high propensity voters, low propensity voters and everyone in between. Republicans had a better turnout operation than we did."
While there has been much handwringing over Latino voters moving away from the Democratic Party, the report noted that Democrats hadn't been abandoned by the group, rather attributing the losses to Latino Republicans outperforming Latino Democrats in terms of turnout.
However, the party noted that they needed to improve how they connected with Latino Texans in and out of the Rio Grande Valley, which supported Trump in the election.
The Texas Democratic Party committed to a deep dive into what went wrong for the party after it underperformed expectations in races up and down the ballot. The state had trended blue for years and a number of political watchers thought 2020 may be the year to put Democrats over the top.
Instead, former President Trump beat President Biden in the state, Sen. John Cornyn (R-Texas) cruised to reelection, a number of contested House seats stayed in Republican hands and Democrats failed to take the state House.
However, the state's Democratic Party did note a number of positive trends in the report. Biden came closest to flipping the state in 25 years, losing by 5.5 percent. Former Democratic nominee Hillary Clinton lost by nine points four years earlier. Democrats noted they also came within roughly 23,000 votes of flipping the state House.
The report also mapped out a potential path to victory in the future for Texas Democrats, including a goal of registering 100,000-150,000 new Democrats per year, building a more robust turnout operation and better targeting persuadable voters.
"If we can respond to these challenges, our 2020 margin quickly becomes surmountable. The goal is not to win one individual election. With sufficient investment and ambition, Texas can be a reliably Democratic state in the next decade," it says.
Texas