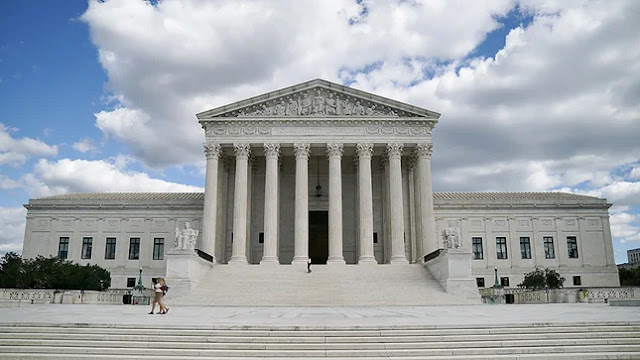 The Supreme Court has agreed to take up a case challenging the Trump administration's "public charge" rule, which limited access to green cards for those deemed likely to accept public assistance.
The case, brought by numerous state attorneys general and advocacy groups, stems from a 2018 rule that critics deemed a wealth test for immigrants and blocked those who may qualify for food stamps or other safety nets.
The Trump administration argued it was in the best interest of the United States to ensure immigrants could be self-sufficient.
The rule has been tied up in litigation for years, with the Supreme Court previously setting aside other lower court injunctions freezing the rule.
The Biden administration has already ordered a review of the public charge rule by the Department of Homeland Security in an early February executive order.
The Biden administration has signaled a willingness to reverse on other cases challenging Trump-era immigration policies.
The Supreme Court granted a White House request to cancel hearings set for this month on Trump’s border wall and “remain in Mexico” policy limiting the ability to apply for asylum.
National