Some thoughts on Van Jones' recent appearance on The View 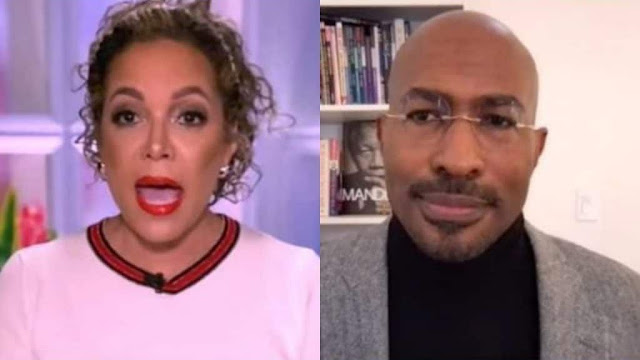 I don’t watch The View, but it must have been a bizarre spectacle when Van Jones went on the program and found himself treated like Jeffrey Lord.
Jones, a notably not-moderate CNN talking head, is not notably charitable to Trump and he made a point of bursting theatrically into tears when news outlets called the election for Joe Biden. He does, however, occasionally make the previously uncontroversial point that as Americans we should occasionally make a point of listening to those who disagree with us.
In his appearance on The View he was promoting a documentary he made with Meghan McCain called The Reunited States. Instead, he was “ambushed,” as the New York Post reported. Panelists asked him questions such as this one (from Sunny Hostin): “There are those who really accuse you of being an opportunist, a chameleon so to speak, who provided a racial cover for former disgraced, twice impeached, President Trump. . . . People in the black community don’t trust you anymore. What is your response?”
Jones must have been wondering whether Hostin had him confused with someone else.
Ana Navarro chimed in, “You’ve lost a lot of people who trusted you, and who saw you as a voice, because of the positions you took during Trump.” What?
The Post reported that sources on The View side of the matter gave them this juicy remark:
Sunny and Ana, like many other influential voices, gave Van the chance to not only address his conflicting political positions but also his cozy relationship with [Trump]. . . . It’s unfortunate that instead of addressing the very real distrust of him within the black community, Van chooses to attack two women of color via social media, hiding behind the guise of ‘unity,’ Van is taking a page from Donald Trump’s playbook, whom he called the ‘uniter-in-chief’ in 2018. His exposure as a persona non grata in the black community is clearly jeopardizing his grift.
Grift? Jones’s pet issue is reducing punishment for some classes of criminals, and though he clearly opposes Trump on nearly everything, he pushed for the First Step Act, which Trump signed, in order to “get people out of prison.” From the standpoint of The View, it appears, it’s more important to reflexively oppose Trump than to try to steer the president to support a bipartisan policy that has reduced prison terms for more than 7,000 people (so far).
After the appearance, Jones said on Twitter, “I was there to promote a film . . . about people listening across the lines of difference. Ironically, the need for the film was made more apparent by some of the co-hosts.”
Opinion