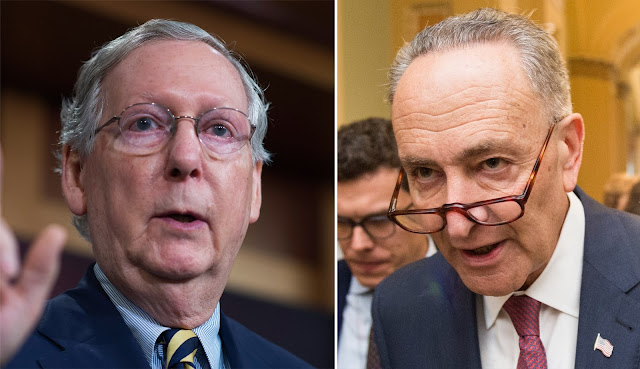 Senators are preparing for a chaotic, potentially all-night session as Democrats race to lay the groundwork for passing coronavirus relief legislation.
The Senate is expected to pass a budget resolution by the end of the week that will allow Democrats to bypass the 60-vote filibuster, and the need for Republican support, on their coronavirus package proposal.
But first, the Senate will need to undergo a marathon session known as a vote-a-rama — the first in more than three years. And unlike the normally tightly controlled Senate, lawmakers will be able to force a vote on anything and stir up political fodder.
“I’ve been through that. Sometimes you vote on 60 amendments and your head is spinning trying to keep up with all the different things that are coming at you,” said Sen. Dick Durbin (Ill.), the No. 2 Senate Democrat.
As of Wednesday night, there were nearly 550 amendments that had been filed, with that number expected to grow before the hours of back-to-back voting gets underway. If any amendments are adopted, it would require the budget resolution to be sent back to the House, which is staying in session Friday in case they need to pass it a second time.
“They’re telling everybody, make sure you have snacks in your hideaway because the cafeterias won’t be open,” said Sen. Tim Kaine (D-Va.).
When, exactly, the vote-a-rama will start is unclear, but senators are eyeing Thursday afternoon. How long it lasts is anyone’s guess, but senators are anticipating a late night, potentially going into Friday morning.
“If we do 20-minute votes, and do three an hour, we start at 1 tomorrow, we would get 36 in by 1 a.m.,” said Sen. John Thune (R-S.D.), gaming out how long it could take if the Senate sticks to roughly 40 amendment votes similar to 2008, 2013 and 2015.
Durbin, asked about timing, predicted that it could start on Thursday afternoon and last for hours.
“They’ve ordered food,” he added.
Sen. Mike Braun (R-Ind.) noted that it will be his first vote-a-rama and that he thought it could “end anywhere between 10 [p.m.]. and 4 in the morning.”
Republicans are already laying potential political traps as they try to get Democrats to go on the record on controversial issues. With the GOP back in the minority, their ability to force votes is limited, making this week’s free-for-all a rare political opportunity over at least the next two years.
“I know there are hundreds of amendments being proposed. We’ll obviously try to winnow that down,” said Sen. John Cornyn (R-Texas). “Not all of them will get votes, but there will be a lot of votes.”
Thune added that “eventually the amendments start to become redundant ... but when that happens I don’t know.”
Senate Minority Leader Mitch McConnell (R-Ky.) offered a preview of the topics that Republicans would bring up, warning that the items he was highlighting were just a “taste.”
“Senate Republicans will be ready and waiting with a host of amendments to improve the rushed procedural step that’s being jammed through,” McConnell said.
“We’ll be getting senators on the record about whether taxpayers should fund checks for illegal immigrants, whether Democrats should raise taxes on small businesses in the midst of this historic crisis and whether generous federal funding should pour into school districts where the unions refuse to let schools open. And this is just a small taste,” he added.
Republicans, for example, are offering amendments to try to box in how school funding can be used in the eventual coronavirus bill.
Sens. Marco Rubio (R-Fla.) and Josh Hawley (R-Mo.), two potential 2024 contenders, are offering amendments to try to restrict the ability for funding under the upcoming coronavirus bill from being used by schools that don’t reopen for in-person learning.
Republicans are also targeting a push by President Biden to increase the minimum wage to $15 per hour as part of the coronavirus bill. Sen. Mike Braun (R-Ind.) has filed an amendment to try to block future legislation that would result in a minimum wage “mandate” on private sector businesses, while Sen. Mike Rounds (R-S.D.) is taking aim at any future legislation that would change the minimum wage.
But not all of the GOP amendments are related to the coronavirus.
McConnell, Rubio and Sen. Tom Cotton (R-Ark.) filed an amendment related to keeping the Supreme Court at nine justices. Some progressives have championed the idea of expanding the high court, which Republicans view as a potent political issue that plays well with their voters.
“We cannot and will not support a bill that redirects funds to long-standing Democratic priorities. My amendments are designed to ensure the American people — not the Senate Democrats’ far-left policies — are protected,” Cotton said in a statement.
And Republicans have filed a slew of immigration-related amendments, as well as proposals on foreign aid, abortion and a tech shield that has become a top target for former President Trump and conservatives.
Democrats used the 2017 budget votes to try to force Republicans, then in the majority, to take a slew of politically tough messaging votes. But this time they expect most of the amendments to come from Republicans.
“I think what you're going to see is ... the Republicans do the lion's share of the amendments. I think the Dems realize, look for us the key is, as the majority, shaping the bill,” Kaine said.
Durbin added that while Democrats are eager to offer amendments after four years in the minority when their ideas were stonewalled by the GOP, any votes as part of the budget process would amount to “political statements” and not things that could become law. Though the budget will pass both chambers, it does not go to the White House for the president’s signature.
“We have an appetite for amendments, but we’re being discouraged,” Durbin said. “We get so few opportunities in the Senate it’s hard to suppress the urge.”
National