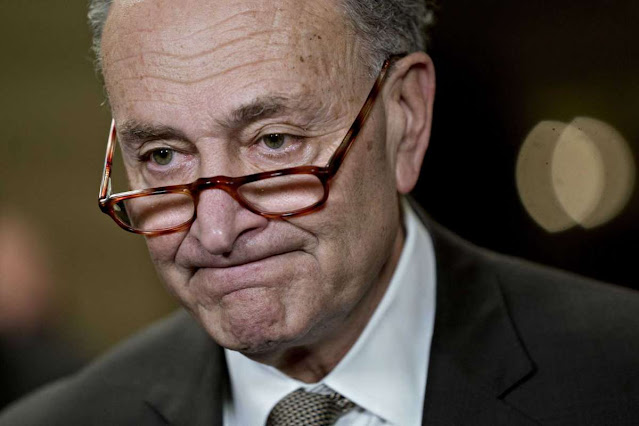 Senate Majority Leader Charles Schumer (D-N.Y.) vowed on Tuesday that Democrats will move forward with crafting a sweeping coronavirus relief bill even as the chamber conducts a historic second impeachment trial for former President Trump.
Schumer, speaking at a press conference with roughly a dozen members of his caucus, warned that Democrats wouldn't let the trial "throw a wrench" into a plan to pass coronavirus relief by mid-March, when federal unemployment benefits are set to expire.
"We are not letting that happen. We can do both at once," Schumer said. "To the pundits who said we can't do both at once: We say you are wrong. We can and we are."
Schumer said that Democrats are working with members of the House, who unveiled part of their package on Monday, and other members of the Senate Democratic caucus, and are still hoping to get GOP support for a "big, bold" relief bill.
"The Senate is moving full steam ahead on a bold plan to get this country out of the crisis," Schumer said.
The Senate floor will be focused for roughly a week on Trump's second impeachment trial, beginning at roughly 1 p.m. Tuesday. If both House impeachment managers and Trump's legal team use all of the time allocated to them and both sides agree to not drag out the trial by calling witnesses, a vote on convicting Trump could come early next week.
While the Senate floor is tied up with the trial, the House will start taking up parts of its $1.9 trillion package in committee this week. The House is out of Washington until Feb. 22.
House Ways and Means Committee Chairman Richard Neal (D-Mass.) announced that the panel will consider nine legislative proposals this week that were drafted as part of the reconciliation process for coronavirus relief. Democrats are using the budget tool to avoid the 60-vote legislative filibuster in the Senate.
Several Senate Democratic chairman involved in crafting the legislation said they are working on the sidelines of the impeachment trial to negotiate their portions of the bill.
Sen. Sherrod Brown (D-Ohio), the chairman of the Banking Committee, said his panel would be working every day on COVID-19 relief.
Senate Foreign Relations Committee Chairman Bob Menendez (D-N.J.) said Democrats had taken Schumer's request that they keep working on coronavirus relief during the trial "seriously."
"We have taken the majority leader's request seriously to work on COVID-19 and related issues during the course of this impeachment trial," Menendez said.
Senate Finance Committee Chairman Ron Wyden (D-Ore.) added that "Senate life has always been about dealing with more than one issue at a time."
"We are making visible and steady progress on our legislation to rescue the American economy ahead of the March 14 cliff for jobless workers," Wyden said.
In addition to working on coronavirus relief, Democrats touted the work they have done so far on confirming Biden's nominations.
Democrats have confirmed seven Cabinet officials so far. Senate committees are also holding nomination hearings this week, including the Homeland Security and Governmental Affairs Committee on Neera Tanden's nomination to lead the Office of Management and Budget, and committee votes on Miguel Cardona to be secretary of Education and Martin Joseph Walsh to be secretary of Labor.
National