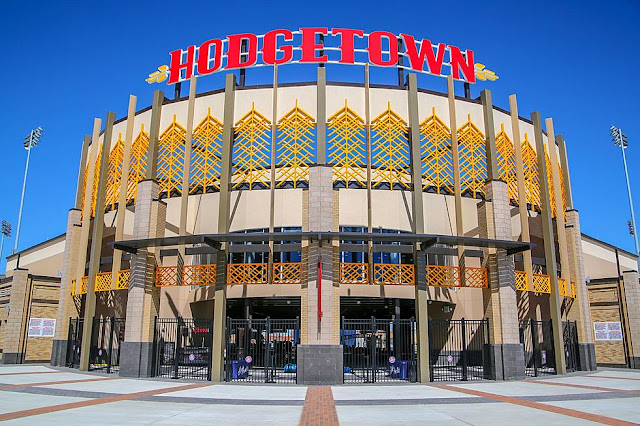 Major League Baseball and Commissioner of Baseball Robert D. Manfred, Jr. officially announced today that Professional Development Leagues will comprise 120 teams playing in 11 leagues over four levels of classification.
The Sod Poodles will participate in a now 10-team Double-A league with two divisions (North and South), which includes the eight previous league teams from past seasons and adds San Antonio and Wichita. Additionally, the historic "Texas League", which was founded in 1888, will no longer be the league's identity; it will now be referred to as the "Double-A Central" league.
Amarillo, the new Double-A affiliate of the Arizona Diamondbacks, will be a part of the South Division alongside the Corpus Christi Hooks (Houston Astros), Frisco RoughRiders (Texas Rangers), Midland RockHounds (Oakland Athletics), and San Antonio Missions (San Diego Padres).
Oppositely, the North Division includes the Arkansas Travelers (Seattle Mariners), Northwest Arkansas Naturals (Kansas City Royals), Springfield Cardinals (St. Louis Cardinals), Tulsa Drillers (Los Angeles Dodgers), and Wichita Wind Surge (Minnesota Twins).
Manfred, Jr. said: “We are excited to unveil this new model, which not only provides a pipeline to the Majors, but continues the Minor Leagues’ tradition of entertaining millions of families in hundreds of communities. In modernizing our Minor League system, we prioritized the qualities that make the Minor Leagues such an integral part of our game while strengthening how we develop professional athletes on and off the field. We look forward to demonstrating the best of our game throughout local communities, supporting all those who are working hard to grow the sport, and sharing unrivaled technology and resources with minor league teams and players.”
As a part of MLB’s realignment, many Minor League affiliates will be in significantly closer geographic proximity to the Major League Clubs with which they are associated. On average, Major League Clubs will now be over 200 miles closer to their Triple-A affiliates. By creating better geographical synergy between a Major League Club and its affiliates, more fans will be able to watch an organization’s players progress in their careers from the Minor Leagues to the big leagues in their home region.
Each MLB Club will provide Minor League players and staffs to their four affiliates – one at each of the Triple-A, Double-A, High-A and Low-A levels. Minor League Clubs will receive PDL licenses from MLB that entitle them to operate in the Professional Development Leagues, ensuring a new set of standards in terms of facilities and player working conditions. The licenses will create many improvements to the experience and lifestyle of Minor League players, such as:
· Player salary increases ranging from 38-72% for the 2021 season.
· Modernized facility standards better suited for professional athletes.
· Improved amenities and working conditions for players and staff.
· Reduced in-season travel for players and coaches.
· Better geographical alignment.
This announcement follows other recent announcements made by Major League Baseball detailing elements of its new comprehensive player development system. The new system will better serve fans, players and Clubs throughout the United States and Canada; preserve high-level, sustainable baseball in nearly every community where the game has historically been played; and position the sport for growth in future years. In combination, the integrated player development system now includes 179 teams across 17 leagues in 43 states and four provinces. Including the Arizona and Gulf Coast Leagues, there are 209 teams across 19 leagues in 44 states and four provinces.
More teams will be joining the broader MLB player development system and other baseball leagues in the coming weeks and months, further enhancing the landscape for fans to continue to cheer on future stars. MLB has nearly completed its work towards ensuring baseball’s presence in almost all of the previous affiliated communities.
Local