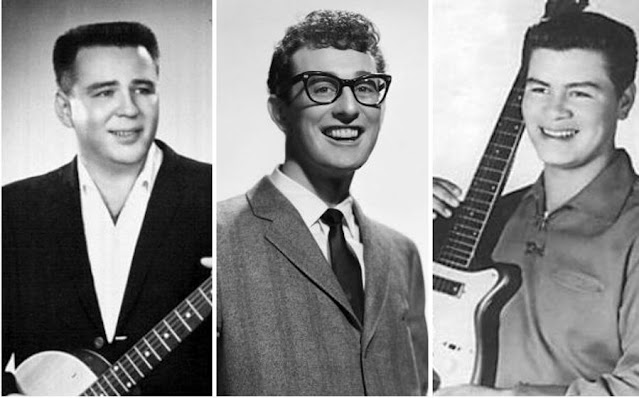 On Feb. 3, 1959, a private plane crash in Clear Lake, Iowa cost the lives of rock stars Buddy Holly, Ritchie Valens and J.P. “Big Bopper” Richardson, along with that of pilot Roger Peterson.
The event is as much the stuff of legend as were the performers who were part of it. Holly had decided to charter a plane to reach the next concert in Moorhead, Minnesota, a fateful decision that ended with the tragic crash in wintry weather.
Valens and Richardson were major stars, and their contributions and passing have not been forgotten by fans of rock 'n roll. Some members of the touring group did not take the plane and survived, notably Waylon Jennings, who became a superstar of his own before passing away at 64 in 2002.
But the loss of Holly, a groundbreaking pioneer who was only 22, impacted the music world and American culture in ways felt for years after the crash - and in some ways, still does.
Holly didn’t invent rock 'n roll, but along with Elvis Presley and years before America had heard of the Beatles, he helped define it. Even more than Presley, Holly attached a sense of rebellious energy to his music that infuriated traditionalists. They were appalled that America, and especially its youth, was trending away from the staid, button-down 1950s and into the more provocative era of self-expression that blossomed in the Sixties.
Performers like Holly, though, belonged to the kids, not their parents. New for its time, this sense of possession exists in the world of performing arts to this day.
The star-maker of the 1950s was Ed Sullivan, whose popular variety show was considered a “must” for any rising performer. Reluctant at first to embrace Presley, Sullivan came around in support.
This was partly because the entertainer was so popular that even Sullivan found he could not ignore him, but also because Sullivan had decided that Presley, in Sullivan’s words, was “all right” - in other words, not a true threat to the status quo.
Sullivan never embraced Holly, because Holly openly challenged Sullivan’s iron-fisted standards on what would be played on the TV show and what would not. More so than any other successful musician of the late 1950s, Holly would not compromise or “settle” - even for Sullivan, for, according to reports, was rebuffed by Holly after inviting the musician back for another show.
His untimely death added a layer of mythology to Holly, but he left an impact that went beyond melodies and lyrics. His band, the Crickets, appealed to black as well as white audiences at a time that was still taboo in even supposedly “progressive” platforms.
His marriage to Maria Elena Santiago, a Puerto Rican woman who is still alive at 86, crossed barriers rarely challenged at the time. His success helped establish that rock 'n roll was not a fleeting fad, as the traditionalists had hoped, but an entirely new genre that would change music, culture, youth attitudes and America itself.
What was also proven by Holly and other 1950s rock pioneers, including Valens and Richardson, was that energy and creativity cannot be capped or muzzled. In the early 1970s, Don McLean immortalized the 1959 plane crash with “American Pie,” a song that paid homage to “the day the music died.”
It didn’t die on Feb. 3, 1959, of course. A new brand, in fact, was just emerging from its infancy. Buddy Holly and his travel mates were not around to see it, which is too bad, because were it not for the intervention of fate, they might still be entertaining fans today - probably at nostalgia and oldies shows, but no doubt still in Holly’s legendary, uncompromising style.
Opinion