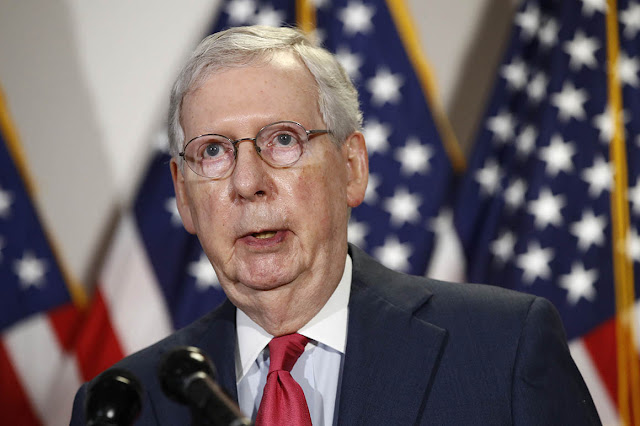 Senate Republicans still smarting over their unexpected demotion to the minority will go on offense Thursday by forcing Democrats to take tough votes on sending stimulus checks to immigrants living in the country illegally and raising taxes on small businesses.
Senate Minority Leader Mitch McConnell (R-Ky.) previewed the strategy ahead of a marathon voting session on a Democratic budget resolution that will lay the groundwork for passing a $1.9 trillion COVID-19 relief package with a simple majority vote, avoiding a filibuster, later this year.
The voting session is described by both parties as a vote-a-rama.
“We’re going to put senators on the record …. We’ll see how our colleagues vote on these basic, commonsense steps. We’ll see what this resolution looks like on the other side — and what signals Democrats send the American people along the way,” McConnell said on the floor Thursday morning.
One of the top GOP priorities is to force Democrats to vote on an amendment sponsored by Sens. Todd Young (R-Ind.) and Tom Cotton (R-Ark.), a potential White House candidate in 2024, that would prohibit stimulus checks for undocumented immigrants.
The amendment applies to what is expected to be the third round of direct payments following checks sent out through last year’s CARES Act and the $900 billion rescue package passed in December.
The amendments, however, do not have the force of law as they are being offered to a budget resolution, which does not require the president’s signature.
“The Biden administration shouldn’t reward illegal immigrants for breaking our laws by giving them checks,” Cotton said in a statement.
A second amendment sponsored by Sen. Marco Rubio (R-Fla.), another potential White House hopeful, and Sens. Tim Scott (R-S.C.) and James Lankford (R-Okla.) calls for preventing tax increases on small businesses during the pandemic.
A third amendment sponsored by Scott, Lankford and Sen. John Barrasso (R-Wyo.) would reduce funding to states that are actively investigating nursing homes for underreported deaths.
A fourth sponsored by Sens. Roy Blunt (R-Mo.) and Scott would call for withholding supplemental funding from schools that do not reopen for in-person learning even after its teachers receive coronavirus vaccines.
The fifth amendment being highlighted by the GOP leaders is sponsored by Senate Minority Whip John Thune (R-S.D.) and calls for limiting the tax liability for medical professionals who crossed state lines to make up for a shortage of health care workers in areas hit hard by the pandemic. It would protect doctors, nurses and other professionals from having to pay state and local income taxes in multiple jurisdictions, in certain cases.
National