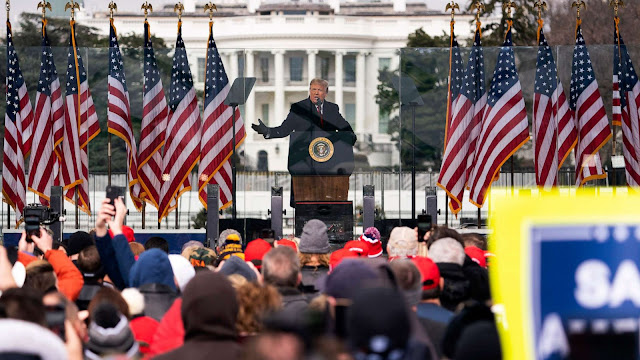 When exactly former President Trump became aware that the Capitol had been breached on Jan. 6 is coming under growing scrutiny from key GOP senators as they mull whether to vote to convict him.
The emphasis on Trump’s actions came into sharper focus as part of an hours-long question-and-answer session on Friday, just one day before the Senate votes on whether he is guilty of "high crimes and misdemeanors" for "willfully inciting violence against the Government of the United States."
Four of the six GOP senators viewed as potential swing votes tried to gain new insight into when Trump found out the Capitol had been breached and how he had responded, underscoring how it's become a significant issue for the handful of undecided Republican senators.
“The real issue is what was the president’s intent, right?” said Sen. Bill Cassidy (R-La.), one of the four senators. “Only the president could answer that and the president chose not to testify.”
GOP Sens. Susan Collins (Maine) and Lisa Murkowski (Alaska) asked what “specific actions” Trump took after learning of the Capitol breach, urging Trump’s legal team to “be as specific as possible.”
Collins and Sen. Mitt Romney (R-Utah) also asked if Trump was aware that then-Vice President Pence had been removed from the Senate chamber for his safety when Trump tweeted in part at 2:24 p.m. that "Mike Pence didn't have the courage to do what should have been done" following Trump's efforts to get his vice president to intervene in the Electoral College count.
Trump’s lawyers were unable to say when specifically Trump found out that a mob had breached the Capitol but said that, based on Trump’s tweets, it was before 2:38 p.m. But they denied that he knew that Pence was in danger.
"The answer is no," Trump lawyer Michael Van Der Veen said on the Senate floor. "At no point was the president informed the vice president was in any danger."
The questions offer rare insight into what topics potential swing votes senators are still weighing after four days of opening arguments and as the trial is poised to come to a close on Saturday.
The responses appeared to fall short of satisfying both Collins and Murkowski.
“It was like, 'Wait a minute that wasn’t very responsive,'” Murkowski said. “I thought it was a better attempt a second time, but yeah, I didn’t really feel like it was responsive to our question."
Collins added that, “I didn't really feel that I got a response, but I’m not sure that that was the fault of the counsel.” She said "it's difficult to answer a question like that" after the House declined to hold hearings to establish certain basic facts.
“I was hoping that one side or the other would have, because I think it's a very important question of when did the president know that the barricades were breached," she said.
In a further warning sign for Trump’s legal team, Cassidy—who has emerged an 11th-hour swing vote—raised a subsequent question that homed in on a disclosure this week from Sen. Tommy Tuberville (R-Ala.), who says he told Trump that Pence had been removed from the Senate chamber.
“Senator Tuberville reports that he spoke to President Trump at 2:15 p.m. He told the president that the vice president has just been evacuated. I presumed it was understood at the time that rioters had entered the Capitol and threatened the safety of senators and the vice president,” Cassidy wrote in his question.
Cassidy, in his question, then noted that Trump subsequently tweeted that Pence “lacked courage,” and hadn’t at that point called for law enforcement back up.
“The tweet and lack of response suggests President Trump did not care that Vice President Pence was endangered or that law enforcement was overwhelmed,” Cassidy continued in his question.
How Cassidy might ultimately vote in the impeachment trial has come under growing scrutiny after he sided with senators calling the trial constitutional this week.
He was the only one of the six senators who voted to proceed that previously supported an effort by Sen. Rand Paul (R-Ky.) late last month to declare the proceedings against the former president unconstitutional.
But Trump’s team said that they rejected the premise of Cassidy’s question, arguing that it was based on “hearsay” from Tuberville.
“I dispute the premise of your facts,” Van Der Veen told Cassidy.
Tuberville unintentionally revived questions about when Trump knew Pence was in danger this week. He disclosed to reporters on Wednesday that he had informed Trump, who called him during the attack, that Pence had been taken out of the chamber.
Tuberville told reporters on Friday evening that he stood by his account. Pressed if the call took place at 2:15 p.m., he said he wasn’t sure about the exact timing but that the call happened as he said it did.
“[I] answered it [and] it was the president. He said a few things. I said 'Mr. President, they've taken the vice president out. They want me to get off the phone, I gotta go,’” Tuberville said.
Pence was evacuated from the chamber at 2:13 p.m, and the Senate chamber was locked down around 2:15 p.m, according to a Jan. 6 pool report from Washington Post reporter Paul Kane who was sheltering in place inside the chamber.
Cassidy’s question caught the attention of other senators, who called it a highlight of the hours-long session.
Romney—the only GOP senator who voted for one of the articles of impeachment against Trump last year—credited Cassidy for asking the question “in a more detailed way and that also clarified their answers."
But Cassidy said he wasn’t satisfied by the response.
“I mean obviously it wasn’t hearsay. Tuberville was right there,” Cassidy said. “I didn’t think it was a very good answer.”
National