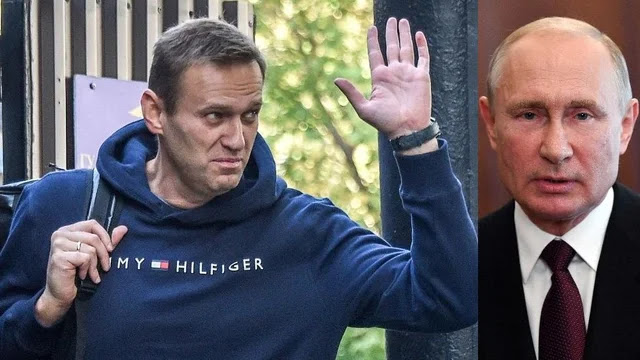 Putin critic Alexei Navalny was sentenced to 2 1/2 years in prison on Tuesday for violating parole while recovering from an assassination attempt, according to multiple reports.
Navalny was arrested last month after he returned to Russia from Germany, which said he was poisoned with a Soviet-era nerve agent.
CNN reports that he was accused of failing to meet parole requirements under a suspended sentence in 2014 for embezzlement, a charge that Navalny says was politically motivated.
Navalny was already serving a 30-day sentence in connection with the case.
A Russian court ruled that he violated the terms of the order, and his suspended sentence was replaced with prison time, according to the CNN. Prosecutors were originally looking for a 3 1/2-year sentence, however the judge took into account the 11 months that Navalny was under house arrest as part of the 2014 case.
During his trial, Navalny gave a passionate speech in which he alleged that Russian President Vladimir Putin’s fear of him was the real reason he was jailed, Reuters reported.
“Someone did not want me to take a single step on my country’s territory as a free man. And we know who and we know why — the hatred and fear of one man, living in a bunker, whom I offended by surviving when he tried to have me killed,” Navalny said in court, according to Reuters.
The sentence will likely spark more pro-Navalny protests, which have resulted in the detention of thousands of Russians.
More than 5,100 people were arrested on Sunday during rallies in support of Navalny, including Navalny’s wife, Yulia Navalnaya, who on Monday was fined $265 for her participation. Another 3,000 people were arrested during separate demonstrations one week earlier.
Reuters said its reporters saw riot police detain 60 of Navalny’s supporters outside of the courtroom on Tuesday. OVD-Info, which monitors arrests during mass protests, reported 311 arrest.
Navalny thanked his supporters, and urged them not to fear repression, The Associated Press reported.
“Millions can't be jailed,” Navalny said. “You have stolen people's future and you are now trying to scare them. I'm urging all not to be afraid."
Secretary of State Antony Blinken said in a tweet that the U.S. is "deeply concerned" by the latest developments.
Biden admin 'deeply concerned' by Russian court sentencing of Navalny
The U.S. has called for Navalny and detained protesters to be immediately released.
World