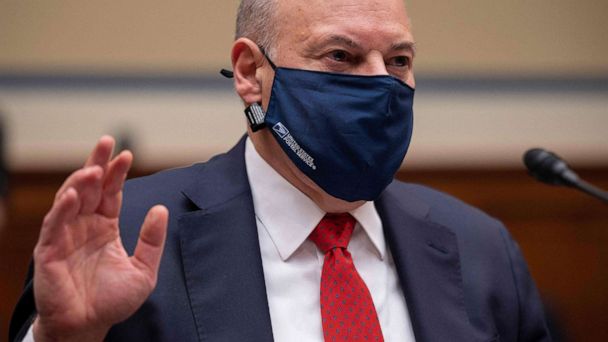 Postmaster General Louis DeJoy offered a public apology before the House Oversight and Reform Committee on Wednesday for recent mail delivery delays during the peak holiday season.
DeJoy, making his first appearance before the panel since a combative hearing last summer over his cost-cutting measures at the agency, acknowledged that the Postal Service experienced delivery delays that were particularly pronounced late last year during the holidays.
"We must acknowledge that during this peak season, we fell far short of meeting our service targets," DeJoy said in his opening statement before the Oversight panel.
"Too many Americans were left waiting for weeks for important deliveries of mail and packages. This is unacceptable and I apologize to those customers who felt the impact of our delays," DeJoy said, pledging that the Postal Service would "strive to do better in our service to the American people and we will do better."
DeJoy, a major GOP donor who previously worked as a logistic company executive, began enacting measures like removing mail sorting machines after becoming postmaster general in June.
He then put further cost-cutting initiatives on hold until after the November elections to address critics' concerns that the changes were meant to undermine a growth in people casting ballots by mail in last year's elections amid the COVID-19 pandemic.
With more people shopping online during the pandemic — especially during the holiday season — the Postal Service experienced an unusual volume of packages late last year that led to widespread delivery delays. The Postal Service said in December that the delays were exacerbated by a shortage in postal workers due to a spike in COVID-19 cases and "capacity challenges" with airlifts and trucking.
DeJoy has said that the Postal Service tried to take preemptive measures such as hiring thousands of seasonal workers and buying maximal amounts of air capacity, but acknowledged that the agency still fell short of its delivery targets.
Many Democrats are clamoring for DeJoy's ouster and have urged President Biden to act quickly to fill the three vacancies on the Postal Service's Board of Governors, which would have the power to remove him.
White House press secretary Jen Psaki said Tuesday that nominating people to fill the vacancies is a "priority" for Biden, but did not offer a timeline.
National