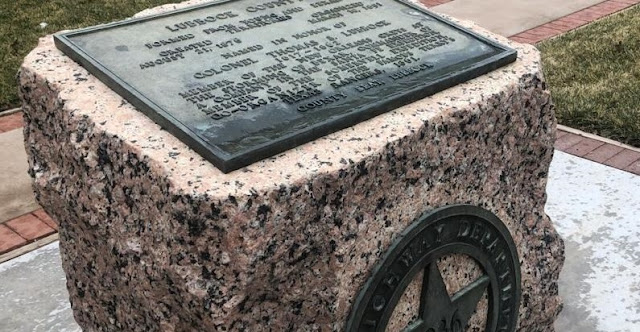 Calls to remove two statues in front of the county courthouse are growing louder.
It is targeting both a 1936 memorial to Colonel Thomas S. Lubbock and a 1964 42" monument that chronicles Texas' effort in the Civil War.
Both are located on the county courthouse lawn.
So far, the petition has more than 1,000 signatures.
"We pretty much just try to hear out our communities and serve them to the best of our ability," Nanci Glitterati said.
Glitterati is a member of "LASER", or "Lubbock Activists Striving to End Racism", the group that wrote the petition.
The non-profit formed over the summer as a wave of activism flooded the nation.
She says she noticed the writing on the statues during one of their protests at the courthouse.
"Lubbock wants to be coined the friendliest city out here, but yet we have a monument that completely disrespects the east side and the north side," Glitterati said. "That's just what it is, and there's no way around it."
Though they do not show depictions she says, the words are problematic.
"One of them, it definitely feeds the false narrative that slaves were giving food and all these other essentials willingly to the confederate army. It's also talking about the Indian savages, and that's quoting the monument itself. So it definitely comes from a time, which is not right after the war, where it's feeding into that white supremacist narrative," Glitterati said.
The petition argues removing them could "put an end to the glamorization of the confederacy."
But Lubbock County Judge Curtis Parrish, to whom the petition is addressed to, says the statues are here to stay.
"I believe this marker, regardless of if someone finds any wording on it offensive, the marker itself has historical value and it will remain on the courthouse," Parrish said.
Second statue in front of courthouse
A second statue, dedicated to Colonel Thomas S. Lubbock, for whom the city and county are named for, also can be found on the courthouse lawn.
He argues the issue is "cosmetic" and there is a better way to move forward.
"We've got a lot of issues, even here in our county, we have issues we need to address. Maybe it's markers like this that can trigger those conversations," he said. "I absolutely love those conversations because I think it brings us as a people together to a better place."
Meanwhile, Glitterati says the non-profit will do whatever it takes to have the monuments removed.
Even providing the money to remove and re-home them, either in a museum or as a gift to an artist of color.
Local