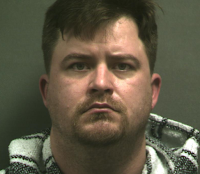 A Perryton, Texas Police Officer has been charged with uploading and sharing sexually explicit images of children on the internet, announced Acting U.S. Attorney for the Northern District of Texas Prerak Shah.
Aaron B. Daugherty, 35, an officer with the Perryton Police Department, was charged via criminal complaint with transportation of child pornography.  Daugherty was arrested at his residence on Tuesday morning, and made his initial appearance in federal court today.
“Mr. Daugherty’s alleged conduct not only victimized children, it shattered the public’s trust given to him as a police officer,” said Acting U.S. Attorney Prerak Shah.  “The Department of Justice will not tolerate anyone who uses the internet to prey on children for sexual gratification.”
“Law enforcement officers are held to the highest standards,” said Dallas FBI Special Agent in Charge Matthew J. DeSarno. “Instead of protecting our most vulnerable population this defendant exploited them by allegedly viewing, uploading and sharing child pornography. We will continue to work with our partners to serve justice for these innocent victims.”
According the complaint, Daugherty allegedly used Kik, a messaging app popular among teenagers, to upload and share explicit images and videos of child pornography.
Law enforcement initiated an investigation of a Kik user, later identified as Daugherty, who was in a chat group sharing multiple images and videos of child pornography.  The videos and images allegedly depicted children as young as toddlers and infants engaged in sexually explicit conduct.  In one instance, while in a Kik chat group on June 22 at approximately 6:37 am, Daugherty stated, “I’m here to look at CP, everybody . . .  Go on with the CP content!”
Federal agents requested the subscriber data for Daugherty’s alleged Kik account.  Kik provided the account information including the IP address.  Agents subsequently subpoenaed the subscriber information associated with the uploads and traced it back to Daugherty.
A search of Daugherty’s residence revealed a cell phone with Kik installed. Under questioning, Daugherty allegedly acknowledged he was the sole owner of the Kik account, which he said he used to view, upload, and share child pornography.
A complaint is merely an allegation of criminal conduct, not evidence. Like all defendants, Daugherty is presumed innocent until proven guilty in a court of law.
If convicted, he faces up to 20 years in federal prison.
The FBI Dallas Field Office – Amarillo Resident Agency, the Texas Rangers, and the Winnebago County Sheriff’s Office conducted the investigation. Assistant U.S. Attorney Joshua Frausto is prosecuting the case.
Local