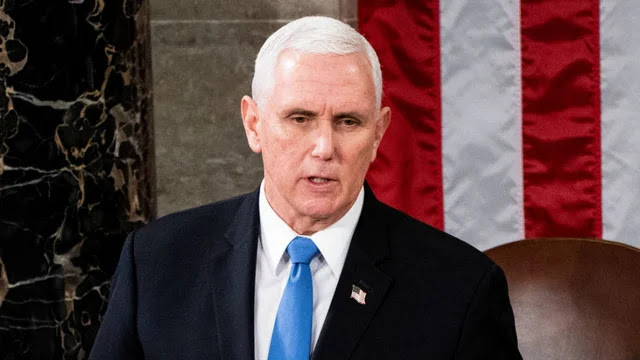 Former Vice President Mike Pence on Wednesday announced the creation of a post-White House transition office near Washington, D.C., but plans to move back to his home state of Indiana later this year.
Pence and former second lady Karen Pence are living in Northern Virginia after leaving office, according to a news release, and the Office of the Former Vice President will be based in the Washington, D.C., area.
"The Vice President and Mrs. Pence look forward to continuing to elevate causes that are near and dear to their hearts and serving the American people when called upon," the release said.
Pence has not made any public appearances since Inauguration Day, when he attended Joe Biden's swearing-in ceremony.
The former vice president's final days in office saw his relationship with former President Trump fracture after four years of unflinching loyalty. Trump had urged Pence to intervene in the certification of electoral votes affirming Biden as president, something Pence said he did not have the authority to do.
Pro-Trump rioters who stormed the Capitol on Jan. 6 were heard chanting threats against Pence, who was whisked away by security before returning to finish the certification.
Pence is considered a potential 2024 GOP presidential candidate, though his relationship with Trump may complicate a potential bid. He is expected to launch a political organization in the coming months.
National