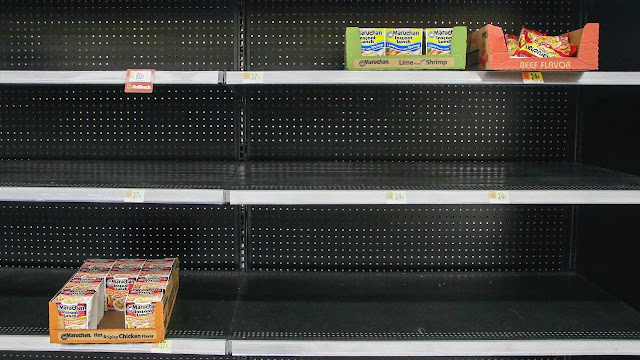 At a Target on the north side of Austin, no workers staffed the checkout lines earlier this week.
One beleaguered manager in a zip-neck sweater sentried the front door, where a pair of muddy towels squelched under the feet of shoppers thronging into the last open grocery store with electricity in the area, and told them that the frozen aisle was off-limits.
“I can’t sell y’all frozen food today because the freezers lost power,” he said. “And just so y’all know, the line is really long.”
The same story has unfolded across the state as three links of the grocery supply chain continue to strain under the great Texas freeze: transportation, stock, and demand.
According to the Texas Department of Transportation’s interactive map, interstate highways in Texas are snow-logged but open. City and county roads in hilly areas, especially in the eastern half of the state, have proven harder to traverse than the level, well-traveled interstates.
In most places, truck traffic has slowed but not halted. Texas Trucking Association President John Esparza said the frozen highways haven’t become an insurmountable blockade to eighteen-wheelers.
“The freeze has impacted trucking much like it has impacted us for a number of disasters that we’ve experienced up to this point, a number of emergencies that have occurred over the last several years. I mean, we continue to hear ‘once in a lifetime event’ an awful lot over the course of the last three or four years. So, trucking has been prepared for these types of situations,” Esparza said.
“By and large, people are staying off the streets, and that is one thing we saw early in COVID-19 as well: accidents go down when congestion goes down overall.”
Despite general preparedness, Esparza also guessed that some industries have cooled down their trucking operations during the freeze as the demand for emergency goods has made other industries busier.
“If you talk to HEB, they’re very, very, very busy. If you talk to Pioneer Energy Resources in the Permian Basin, they’re going to say, ‘We’re good right now…’ A driver may answer a call from a guy like me who says, ‘Hey, you’re an oil field company. Can you take your existing tankers, sanitize them to haul water, and help me get some water from this water source to the Memorial Hermann Hospital in Houston because they’re running out of heat?’” Esparza said.
“Clearly the pressure on moving groceries, on moving diesel, on moving gasoline, you know, some of the staples that we’re all concerned about… the demand for that is going to pick up. That’s the whole reason why the governor gives the emergency declaration… to issue a waiver on all those restrictions.”
Stocking and holding shipments has proven more of a challenge for grocery stores than receiving them. Erratic power outages left some stores entirely without power, funneling shopper traffic into the fewer stores that remained. Slim electricity margins forced some stores to limit what stock they could sell and trim their business hours to conserve power. Employee shortages have also contributed to supply strain, leaving stores to run on fumes with minimal staff and lengthening lines in turn.
Heightened demand for food and other goods, exacerbated by a shrinking pool of available grocery stores, has left shelves bare when it comes to the essentials. Texas outlaws “exorbitant or excessive price in connection with the sale or lease of fuel, food, medicine, lodging, building materials, construction tools, or another necessity” — or, in other words, “price gouging.”
Ironically, this law will not apply to Texans’ electric bills once the ice thaws. Because this law mashes down the prices of food and groceries buoyed by high demand, customers have cleared the milk and produce aisles quickly. While most states in the country enforce similar laws, Texas’ version does not measure price gouging with a hard number. For example, Arkansas passed a law making it unlawful to jack up the price of certain emergency goods in a disaster by more than 10 percent of their pre-disaster cost.
Texas