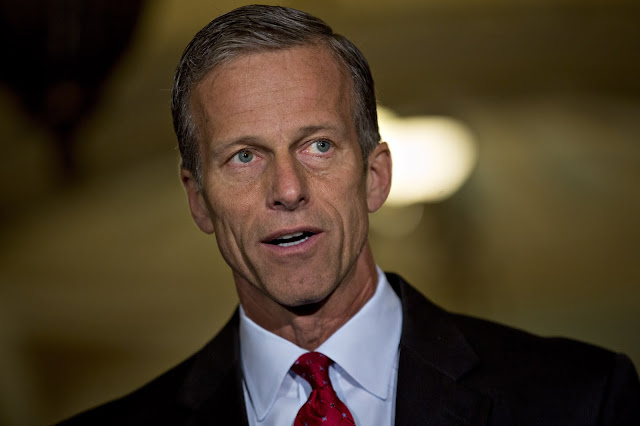 Sen. John Thune (R-S.D.), the No. 2 Republican senator, indicated on Friday that he could be open to censuring former President Trump, depending on how the resolution was framed.
Asked about censuring Trump, Thune indicated that proposals are floating around but caveated that it would need be "effective."
"I know there are a couple of resolutions out there. ... I've seen a couple of resolutions at least that I think could attract some support," Thune told reporters.
Pressed if he was saying the resolutions could get support from him, he added: "Yeah."
Sen. Tim Kaine (D-Va.) has drafted a censure resolution that would also include language from the 14th Amendment that he hopes could be used to bar Trump from future office.
Thune, however, appeared to indicate that a resolution that also works in the 14th Amendment was largely a non-starter.
"I don't think ...those will go anywhere," he said.
Thune's comments came as the Senate embarks on Day Four of Trump's second impeachment trial, where the former president is most likely to be acquitted on the charge that he incited the violent insurrection at the Capitol on Jan. 6.
Democrats would need 17 GOP votes to convict Trump, but only a handful of Republicans like Sen. Lisa Murkowski (R-Alaska) have indicated they would vote to convict him.
National