Nikki Haley on Trump: 'We shouldn't have followed him' 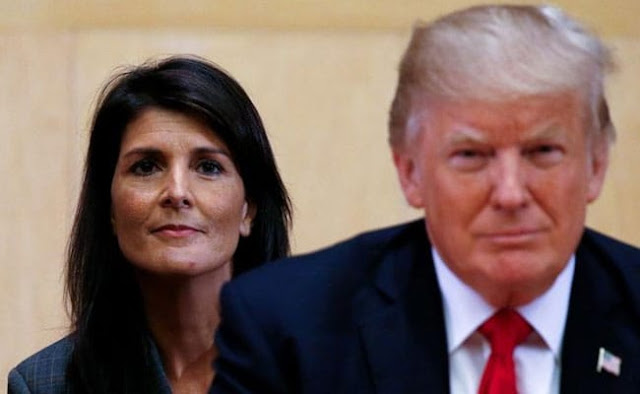 Former U.S. Ambassador to the United Nations Nikki Haley issued stunning remarks breaking with former President Trump, telling Politico in an interview published Friday that she believes he “let us down.”
“We need to acknowledge he let us down,” Haley, who served in her ambassador role under Trump, said. “He went down a path he shouldn’t have, and we shouldn’t have followed him, and we shouldn’t have listened to him. And we can’t let that ever happen again.”
Haley’s remarks are her strongest yet against the former president in the aftermath of the Jan. 6 Capitol riot and come as Trump's legal team is set to present its defense of Trump on Friday in his second Senate impeachment trial.
The House impeached the former president for a second time shortly after the insurrection, saying his unsubstantiated claims of widespread voter fraud following his election loss to President Biden and his comments earlier that day incited the mob that stormed the Capitol.
The former South Carolina governor told Politico that she has not spoken with Trump since the mob attack, further expressing her disappointment with remarks he gave at a rally ahead of the assault condemning his own vice president, Mike Pence.
“When I tell you I’m angry, it’s an understatement,” Haley said. “I am so disappointed in the fact that [despite] the loyalty and friendship he had with Mike Pence, that he would do that to him. Like, I’m disgusted by it.”
Haley said that the president "believes he is following" his oath of office by challenging the election results, adding, "There’s nothing that you’re ever going to do that’s going to make him feel like he legitimately lost the election."
"He’s got a big bully pulpit. He should be responsible with it," she said.
Haley in the days immediately following the attack said in a speech to Republican National Committee (RNC) members that Trump was “badly wrong with his words” at his Jan. 6 rally.
"And it wasn’t just his words," she added at the time. "His actions since Election Day will be judged harshly by history."
Haley said in Friday's Politico interview that when she gave the RNC address, she "was not expecting a whole bunch of love from that speech."
“I know how much people love Donald Trump. I know it. I feel it," she continued. "Whether it’s an RNC room or social media or talking to donors, I can tell you that the love they have for him is still very strong. That’s not going to just fall to the wayside.”
She went on to say, “Nor do I think the Republican Party is going to go back to the way it was before Donald Trump. I don’t think it should."
Instead, Haley argues, "what we need to do is take the good that he built, leave the bad that he did, and get back to a place where we can be a good, valuable, effective party. But at the same time, it’s bigger than the party."
"I hope our country can come together and figure out how we pull this back," she added.
Haley, who many speculate is a possible 2024 presidential contender, announced a new political action committee last month named after her Stand for America advocacy group. Her spokeswoman Chaney Denton said at the time that the PAC would be focused on helping get conservatives back in control in the House and Senate in 2022.
Bradley Crate, the treasurer for Haley’s PAC, was the treasurer for Trump’s presidential campaign in 2016 and Sen. Mitt Romney’s (R-Utah) top financial adviser for both his presidential runs.
National