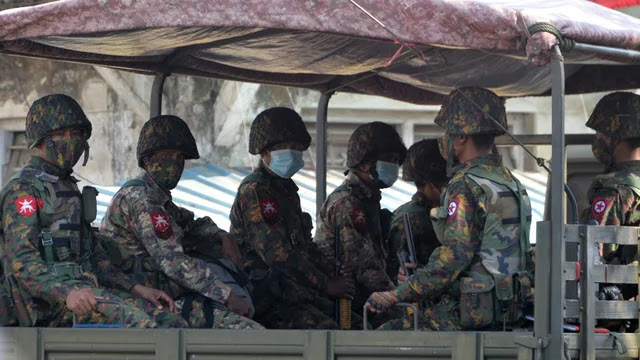 Myanmar’s military junta, which ousted and detained the nation's civilian leaders earlier this month, declared on Tuesday that it will hold an election and “hand power to the winning party.”
A spokesman for the ruling council also defended the military’s Feb. 1 takeover, internationally viewed as a coup, during the military junta’s first news conference, according to Reuters.
“Our objective is to hold an election and hand power to the winning party,” Brigadier Gen. Zaw Min Tun said while denying that the military’s rise to power qualified as a coup and that former leaders like Aung San Suu Kyi were in detention, saying they were instead in their homes for security purposes.
“We guarantee ... that the election will be held,” he added in the briefing from the capital Naypyitaw, which aired on Facebook, a social media platform that has been restricted by the military, Reuters noted.
Military officials in Myanmar, also called Burma, have not set a date for the country’s election, but the brigadier general said the military will not retain power for long. When it took power, the military declared a state of emergency slated to last one year.
The takeover came right before Myanmar’s Parliament was scheduled to meet after Suu Kyi’s party won overwhelmingly in elections. The military has alleged that voter fraud impacted the results, but Myanmar’s election commission dismissed the claims.
Thousands of protesters have gathered in Myanmar's cities since the coup for protests that the military alleged amounted to violence and intimidation.
Police have responded with force, opening fire on the crowds several times, mostly with rubber bullets. One woman shot last week with rubber bullets is not expected to survive, and Zaw Min Tun reported that one police officer died from injuries he received during a demonstration, Reuters reported.
Suu Kyi on Tuesday was also charged with violating coronavirus restrictions, which carries a sentence of up to three years. But under military rules, the leader could be detained indefinitely.
Last week, President Biden’s administration redirected $42.4 million in aid to Myanmar and sanctioned several individuals and entities associated with its military.
The U.S. president called on Myanmar to recognize the results of its November election and for the military to restore power to the elected officials.
World