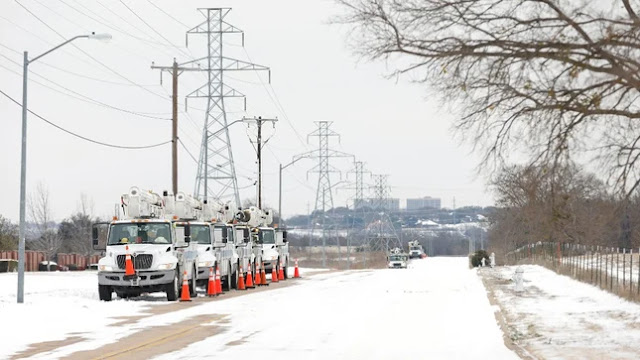 Millions of people in Texas are still without heat as the historic winter storm that hit the Lone Star State begins to move away.
At least 2.7 million Texas households were still without heat as of Thursday morning, according to Reuters. Water supplies are also still cut off in homes across the state, with at least 12 million people either having no water running through the taps in their homes or intermittent service.
Residents in over 100 Texas counties have been advised by state officials to boil their water before drinking it.
Freezing temperatures are expected to continue through the weekend in the Lone Star State. The state on Thursday will see low temperatures in the single digits in the its Panhandle, temperatures in the 20s in the central portions and near 30 in coastal cities and towns, according to The Washington Post.
But temperatures are expected to increase approximately 10 degrees by Friday and approximately 20 degrees by the weekend, according to the newspaper.
Texas officials are predicting that restoring electricity across the state will take time.
The state’s energy grid has struggled under the freezing temperatures. Natural gas producers were also strained by the cold weather, with producers needing electricity to run their compressors.
Texas Gov. Greg Abbott (R) on Tuesday called on the state legislature to investigate the Electric Reliability Council of Texas as millions were without power.
“Far too many Texans are without power and heat for their homes as our state faces freezing temperatures and severe winter weather. This is unacceptable,” Abbott said in a statement while requesting that reforming the grid operator be prioritized as an emergency item for state lawmakers.
Nearly two dozen deaths have been attributed to the winter weather in the state, with officials predicting that more will be reported in the coming days and weeks, Reuters noted.
Texas