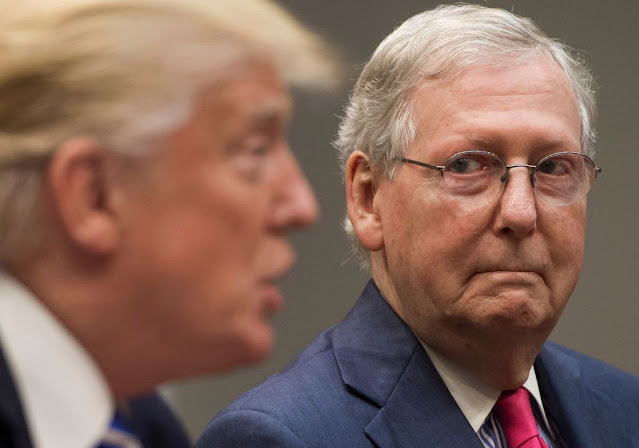 Senate Minority Leader Mitch McConnell (R-Ky.), who just weeks ago excoriated former President Trump on the Senate floor, blaming him for the riot at the Capitol, on Thursday said he would back Trump if he wins the party's 2024 presidential nomination.
"There's a lot to happen between now and '24. I've got at least four members that I think are planning on running for president. ... Should be a wide open race," McConnell said during an interview with Fox News's Bret Baier.
Asked if he would support Trump if he wins the party's nomination in 2024, McConnell added: "The nominee of the party? Absolutely."
The statement represents a remarkable about-face for McConnell, who after the impeachment trial had signaled he wanted his party to turn sharply from Trump.
That move sparked criticism from other Republicans, and McConnell has been quiet about Trump in subsequent weeks.
The remarks on Fox News are McConnell's first to directly address Trump since the former president lashed out in a blistering statement after the GOP leader blamed him for the attack on the Capitol.
McConnell, in the floor speech, did not sound like a Republican who would again back the former president on another White House run.
He said Trump was "morally responsible" for the attack, where a pro-Trump mob breached the building in an effort to stop the counting of the Electoral College vote.
Trump fired back in a statement calling McConnell a "a dour, sullen, and unsmiling political hack.”
McConnell declined to talk about Trump's criticism during his weekly press conference. After Baier played a clip of his floor speech, where he issued the Trump criticism, McConnell instead pivoted to argue that Republicans are focused on uniting against President Biden's agenda.
"My point is what happened in the past is not something relevant now, we're moving forward. We've got a new administration," he said.
McConnell similarly declined to say if he blamed Trump for the party's loss of two Senate seats in Georgia or if he thought the former president should speak at the Conservative Political Action Conference. Trump is scheduled to speak there Sunday.
"I don't have any advice to give the former president about where he should speak or what we should say," McConnell said.
Republicans fumed at Trump after the Capitol attack, which directly endangered former Vice President Mike Pence and lawmakers in both parties.
But the former president retains a vice-like grip on a base of voters that Republicans will need to win back the House and Senate, and he's shown no signs of shrinking away from the political spotlight.
McConnell, during the Fox News interview, emphasized trying to unite the party heading into the midterms. Republicans hold 50 seats, putting them on the cusp of the majority, but they are also playing defense in 20 states in 2022.
"Let's focus on winning the House and the Senate in '22," McConnell said, adding that it would give the party's next presidential nominee "whoever that may be, the best chance to be victorious."
McConnell's comments during his Fox News interview drew immediate praise from Sen. Lindsey Graham (R-S.C.). Graham, who traveled to Florida last weekend to talk about 2022 with Trump, had criticized McConnell's floor speech.
"Very good statement by Senate Republican Leader Mitch McConnell tonight on @FoxNews indicating that he’s bullish on the Republican Party’s future in 2022 and beyond and is looking forward not backwards," Graham tweeted.
National