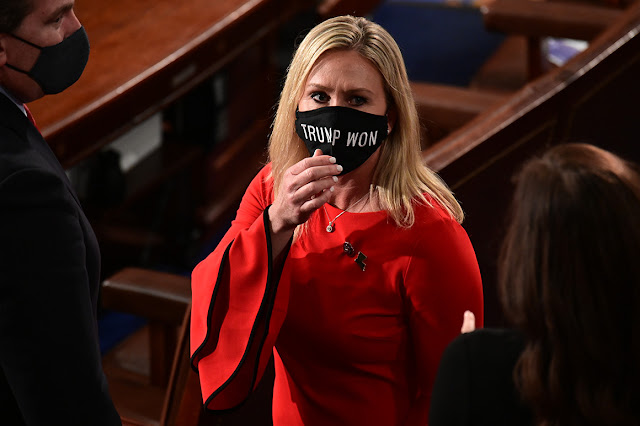 House Minority Leader Kevin McCarthy (R-Calif.) announced no disciplinary actions against Rep. Marjorie Taylor Greene (R-Ga.) in a statement released as he met with his caucus.
During the meeting, he told members he did not want to remove Greene from her committee assignment, according to a senior GOP source in the room.
In the statement, McCarthy condemned her incendiary remarks, but offered no disciplinary actions.
“Past comments from and endorsed by Marjorie Taylor Greene on school shootings, political violence, and anti-Semitic conspiracy theories do not represent the values or beliefs of the House Republican Conference," the statement read. "I condemn those comments unequivocally. I condemned them in the past. I continue to condemn them today. This House condemned QAnon last Congress and continues to do so today.”
McCarthy met with Greene on Tuesday, and the GOP leader said he gave her the same message.
“I made this clear to Marjorie when we met. I also made clear that as a member of Congress we have a responsibility to hold ourselves to a higher standard than how she presented herself as a private citizen. Her past comments now have much greater meaning. Marjorie recognized this in our conversation. I hold her to her word, as well as her actions going forward.”
The House is set to vote on removing Greene from her committee assignments on Thursday.
She is a member of the Education and Labor Committee, a point of scrutiny given her past statements suggesting school shootings were staged to build the case for gun control.
She has also been heavily criticized for past remarks supporting the execution of Speaker Nancy Pelosi (D-Calif.) and perpetuating conspiracy theories that the 9/11 terrorist attacks were a hoax and that lasers in space controlled by a Jewish family were responsible for wildfires in McCarthy's home state of California.
Senate GOP leaders have condemned Greene forcefully, but have no power on her committee assignments.
“Loony lies and conspiracy theories are cancer for the Republican Party and our country,” Senate Minority Leader Mitch McConnell (R-Ky.) said in a statement first shared with The Hill on Monday.
Other Republicans have offered support for Greene keeping her assignments.
House Majority Leader Steny Hoyer (D-Md.) rejected a deal proposed by McCarthy to remove her from the Education and Labor Committee but allow her to remain on the House Budget panel.
Hoyer announced shortly after his conversation with McCarthy that Democrats would move forward with a floor vote to strip her of her committee posts — a difficult vote for Republicans in swing districts.
"I spoke to Leader McCarthy this morning, and it is clear there is no alternative to holding a Floor vote on the resolution to remove Rep. Greene from her committee assignments," Hoyer said in a statement earlier in the day. "The Rules Committee will meet this afternoon, and the House will vote on the resolution tomorrow."
McCarthy’s handling of the Greene situation was met with frustrations from some in the party, arguing he should have acted faster to prevent the controversy from dragging out.
“There’s no other way to slice this: McCarthy completely screwed this up and threw the conference under the bus in the process. It’s the job of the leader to protect members from bad floor votes. He could’ve dealt with this a week ago and his inability to ever take a position allowed Democrats to make the decision for him and put our members in the absolute worse position possible,” one GOP operative said following Hoyer’s announcement on the vote.
National