Many get power back in Texas, but water issues rise 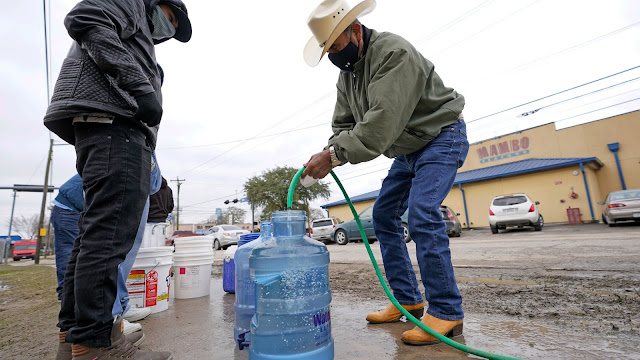 Millions of Texans' power was returned Friday after days of power outages across the state due to winter storms that paralyzed the electric grid, but many are now facing a lack of safe drinking water.
Almost 190,000 Texas businesses and homes remain without power, a decrease from 3 million who faced outages on Wednesday, The Associated Press reported.
Now, nearly 7 million people in the state have been ordered by local authorities to boil their tap water before drinking it. Record low temperatures in the state have damaged pipes that carry the water supply and jeopardized the drinking water systems.
Texas Gov. Greg Abbot (R) urged Texans to shut off their water in an effort to prevent more pipes from bursting from the cold temperatures and to preserve pressure. He also warned that the state is "not out of the woods,” yet as temperatures are still below freezing in many regions, according to the AP.
President Biden called Abbott Thursday night to offer additional help over the various crises that Texas faces.
The Federal Emergency Management Agency (FEMA) earlier Thursday supplied the state with 60 generators to support critical sites like hospitals and water facilities, 729,000 liters of water, more than 10,000 wool blankets, 50,000 cotton blankets and 225,000 meals.
The president also approved disaster declarations for Oklahoma and Louisiana on Thursday.
“Jill and I are keeping Texas, Oklahoma, and other impacted states in our prayers. I’ve declared states of emergency, authorized FEMA to provide generators and supplies, and am ready to fulfill additional requests,” Biden tweeted. “Please heed the instructions of local officials and stay safe.”
The news from the Long Star State comes amid a sweeping weather disaster in the southern U.S. Tennessee and Mississippi, which were also hit with winter storms, have struggled with water main breaks and pipe issues due to the low temperatures and have issued advisories calling on people to boil water before drinking, the AP reported.
Jackson, Miss., Mayor Chokwe Antar Lumumba told the outlet that nearly 150,000 people in the city were without water. Crews attempting to refill city tanks on Thursday faced a shortage of chemicals to treat the water.
“We are dealing with an extreme challenge with getting more water through our distribution system,” Lumumba said.
Texas