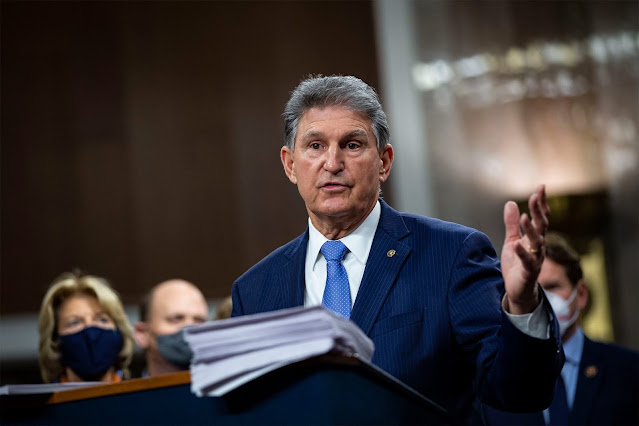 Sen. Joe Manchin (D-W.Va.) is the most sought after swing vote in the 50-50 Senate, and a popular target for every interest group in Washington seeking his support on legislation.
He's also a tough target, given that everyone in town wants a few minutes with the senator seen as the make-or-break vote on many bills and nominees.
“He’s a really hard dude to lobby and right now. There’s just a line from here to Timbuktu of people waiting to have him save their cause or company or issues. It makes him a very challenging guy to lobby as a result,” one Democratic lobbyist said.
Lobbying firms are now trying to make up for lost time by scrambling to connect with Manchin more than a month after the Georgia Senate runoffs tipped the balance of power to Democrats.
“I do think that it would be ideal for anybody leading a firm to try and find a Manchin person. But that’s interesting that there aren’t more,” the lobbyist added.
The small group out there consists of people like Hayden Rogers, Manchin’s chief of staff from 2013 to 2015 who’s now a partner at Integrated Strategy Group; Patrick Hayes, chief of staff as recently as 2019 who lobbies for telecommunications company Altice; Church Hutton, Manchin’s policy adviser who’s a lobbyist for Sierra Nevada Corp., a government contractor; and former energy counsel Robert Diznoff, a lobbyist for Amazon.
Some former Senate colleagues are multi-client lobbyists, including former Sen. Joe Donnelly (D-Ind.), who’s with Akin Gump, and former Sen. Mark Pryor (D-Ark.) at Brownstein Hyatt Farber Schreck.
But some K Street veterans say that former staffers and ex-senators are unlikely to have much success with Manchin.
“I think people trying to lobby Manchin via downtown ‘hired guns’ are misguided at best and boneheaded at worst. The way to ‘lobby’ Manchin is via your own West Virginia grassroots assets. If you don’t have them, you don’t matter to him,” a trade association source said.
Two groups with a West Virginia presence — the Poor People’s Campaign and Service Employees International Union — landed a virtual meeting with Manchin on Thursday, when they tried to persuade the senator to back off his opposition to a $15 minimum wage increase.
Manchin became the first Senate Democrat to come out against the wage hike that’s part of President Biden’s $1.9 trillion relief plan. The measure requires the support of all 50 Democrats if they want to pass it through the budget reconciliation process, making Manchin a crucial part of their plan.
Manchin also became the first Democrat to say he would vote against Neera Tanden, Biden’s nominee to lead the White House Office of Management and Budget, putting her nomination in jeopardy.
On the minimum wage push, Manchin’s opposition is welcome news to the restaurant industry.
Sean Kennedy, executive vice president of public affairs for the National Restaurant Association, said the best tactic when lobbying Manchin is to frame things from a West Virginia perspective.
“For a state like West Virginia, local business is critical, and Joe Manchin is hyper-aware of every single employer. If you know your facts cold and can demonstrate why you’re relevant to the state, he and his staff are incredibly open to hear your views,” he said.
Manchin, a former governor, is constantly navigating the challenges of being a Democrat in West Virginia, a state where Biden won less than 30 percent of the vote in 2020.
“He’s a difficult guy to lobby because you have a point of view and you have to get him to another point of view and he’s got to run that through an algorithm that will help him win his seat in West Virginia and that algorithm is pretty complicated,” the lobbyist said.
Manchin, a three term senator, isn’t up for reelection until 2024. In 2018, he won his seat by just over 3 percentage points.
“He’s probably the Democrat with the sharpest, most honed political skills in the caucus. The reason is, he’s a Democrat in West Virginia. He doesn’t get a day off from fighting to survive and he’s been that way for a long time,” said Ivan Zapien, a partner at Hogan Lovells.
“Does that make him easy to lobby? No, it makes it very challenging because he’s not playing political checkers, he’s playing political three-dimensional checkers. He’s just got to managing all these really difficult challenging issues.”
In the words of one lobbyist: “He’s got to straddle not just both sides, he’s got to straddle like 10 different sides. Unquestionably, when you’re a Democrat from West Virginia you sleep with one eye open.”
National