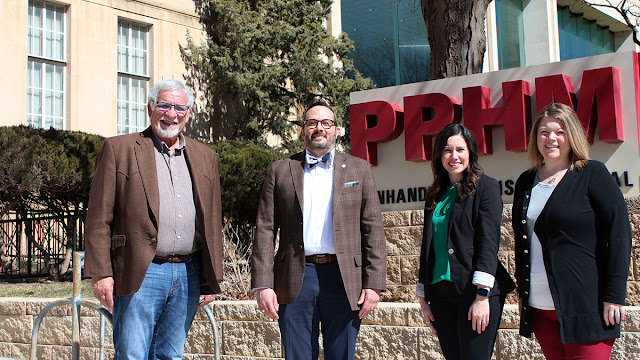 An interim internal leadership team for the new Cultural Foundation of the Texas Panhandle will provide continuity as the advisory body continues to take shape.
As announced Feb. 8, CFTP places Panhandle-Plains Historical Museum and the Texas Panhandle Heritage Foundation, producers of the outdoor musical drama “Texas,” under the oversight of West Texas A&M University, as a member of The Texas A&M University System.
WT is seeking a full-time executive director to lead CFTP’s efforts for the WT campus in Canyon. The Cultural Foundation will be led by an advisory board made up of prominent Texans with a history of service to the state who will be devoted to advancing CFTP’s mission.
Several current PPHM and TPHF staff members will fill interim leadership roles:
Heather Friemel, PPHM associate director of finance and outreach, will serve as interim executive director. Friemel has more than a decade of management experience and has worked full time at PPHM since 2013. A WT alum, she currently oversees all administrative and financial functions for the museum and oversees the outreach team that creates programming and educational endeavors.
Buster Ratliff, PPHM development director, will serve as interim associate director. Ratliff joined the museum in 2003 as operations coordinator. Also a WT alum, Ratliff has a master’s degree in information organization from the University of North Texas and currently oversees development, collections and exhibitions management.
Stephanie Price, PPHM associate director of marketing, will fill the same role for the foundation. A decorated marketer with a bachelor’s degree from WT, a master’s degree from Kent State University and certification in hospitality and tourism management from Florida Atlantic University, she has worked at PPHM for eight years.
Dave Yirak, longtime artistic director of “Texas” and executive director of Texas Panhandle Heritage Foundation, will continue in those capacities on an interim basis. Yirak, who retired after 32 years as Canyon High School drama teacher in 2016, was in the “Texas” cast from 1979 to 1981, then from 2002 to 2004. He became the director of the show in 2006, then was named artistic director for TPHF in 2008.
“The work of Heather, Buster and Stephanie has been tireless throughout this time of change, and Dave will provide a continuity in leadership as we move into the future,” said WT President Dr. Walter Wendler. “I commend them all for their exemplary leadership and commitment to Panhandle culture. They will help usher in a new era of continued responsiveness and commitment to our region and those who call it home.”
The Panhandle-Plains Historical Society was founded in 1921in an effort to preserve this region’s human and natural history. Construction on Pioneer Hall began in 1932, and Panhandle-Plains Historical Museum, now the largest history museum in the state, opened its doors the following year on the campus of what is now West Texas A&M University.
The effort to celebrate the history of the region through an outdoor musical began in 1960 when Canyon community leader Margaret Harper reached out to playwright Paul Green. The musical, produced by the TPHF, debuted in 1966 and, until COVID-19 forced a cancellation of its 2020 season, has been performed annually before thousands of audience members in Pioneer Amphitheatre inside Palo Duro Canyon State Park.
An executive assistant also will be brought on board to provide support for the executive director, staff and the various boards.
Local