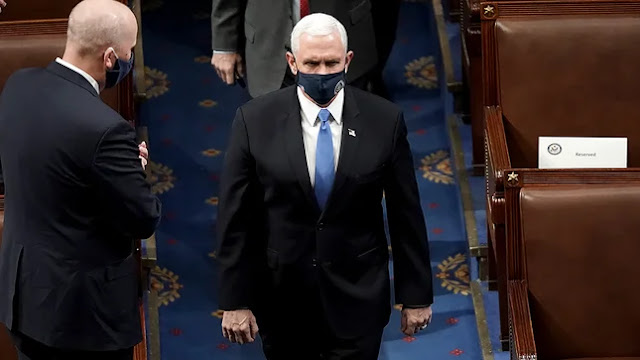 Video of the Capitol insurrection introduced by the Democratic impeachment managers revealed that as then-Vice President Pence fled the Capitol mob on Jan. 6, the “nuclear football” was accompanying him, CNN reported Thursday night.
The backup “football” of equipment and nuclear codes needed to launch a strike is identical to the one carried by officials near the president. It always follows the second in command in case the president becomes incapacitated.
A Pentagon official told CNN that U.S. Strategic Command became aware of the threat to the football after a startling video played at the Senate impeachment trial Wednesday showing Pence, his Secret Service agents and a military officer carrying the briefcase with classified nuclear launch information fleeing the Senate.
Secret Service evacuated Pence and his wife, daughter and brother, Rep. Greg Pence (R-Ind.), out of a room connected to the Senate chamber at 2:26 p.m., 37 minutes after the initial breach of protesters, according to new security footage shown by the prosecutors.
The timeline unveiled by House Democrats revealed how close a call it was for Pence and, by extension, the briefcase containing nuclear codes.
According to CNN, it is unclear if officials at the National Security Council or the Pentagon were aware of the threat against Pence and members of his team prior to the impeachment video.
"The risk associated with the insurrectionists getting their hands on Pence's football wasn't that they could have initiated an unauthorized launch. But had they stolen the football and acquired its contents, which include pre-planned nuclear strike options, they could have shared the contents with the world," Kingston Reif, an expert on nuclear weapons policy at the nonpartisan Arms Control Association, told CNN.
"Such an outcome would have been a security breach of almost incomprehensible proportions," Reif continued. "And it ought to raise further questions about the rationale for the anachronism that is the football."
Vipin Narang, an associate professor at MIT who researches nuclear proliferation, wrote on Twitter that the briefcase is a communication device. However, he wrote it was "jarring" to know that former President Trump possessed sole nuclear authority during Pence's harrowing evacuation.
“More jarring than seeing the ‘football’ follow Pence as he was being evacuated — it is just a communication device, at no point could it’s compromise have resulted in a launch — is knowing that the man who possessed sole authority to launch American nukes at the time incited this mob,” Narang wrote.
The Defense official told CNN that the military officer maintained control of the backup football at all times. Since Trump was safely inside the White House, Pence’s system was reportedly never activated.
Pentagon press secretary John Kirby told reporters this week that he would not comment on “specific command and control over nuclear strategic forces.”
The Pentagon and the National Security Council declined to comment to CNN on the Pence video.
Some of the rioters who broke into the Capitol have indicated they were planning to assassinate Pence for refusing to block certification of Biden’s victory.
However, Democratic impeachment managers have made a point of praising Pence for his “patriotism” in certifying the election results on Jan. 6, despite the danger he was in. Rioters were heard on Capitol Hill chanting “Hang Mike Pence” over his refusal to unilaterally subvert the election results.
Rep. David Cicilline (D-R.I.), one of the House impeachment managers, noted Trump’s attacks on Pence and his failure to “not once condemn the attackers.”
"In fact, on January 6th, the only person he condemned is his own Vice President Mike Pence, who was hiding in this building with his family, in fear for his life. In the first crucial hours of this violent attack, he did nothing to stop it, nothing to help us,” Cicilline said.
National