Greene's future on House committees in limbo after GOP meeting 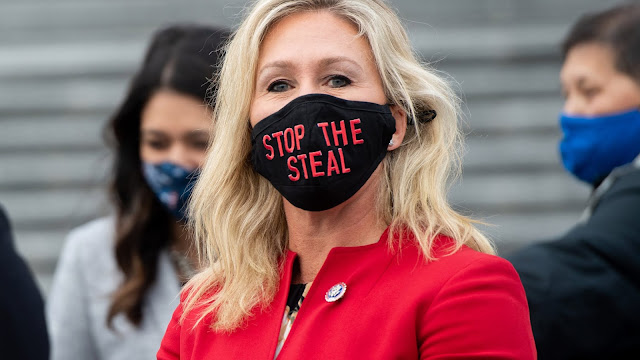 The House GOP Steering Committee on Tuesday night did not reach a decision on whether Rep. Marjorie Taylor Greene (R-Ga.) will retain her committee assignments, two GOP sources familiar with the talks said.
The meeting, which lasted more than an hour, happened shortly after House Minority Leader Kevin McCarthy (R-Calif.) met with Greene as pressure ramps up for the GOP to take action to condemn her embrace of conspiracy theories and the emergence of violent and racist remarks made in recent years.
“No decision. A lot of options on the table ... we’ll likely meet again tomorrow," one GOP lawmaker said.
Greene, who has expressed support for the QAnon conspiracy in the past, has come under fire for previously voicing support for executing Speaker Nancy Pelosi (D-Calif.). She has also perpetuated conspiracy theories that the 9/11 terrorist attacks, as well as the Sandy Hook and Parkland mass school shootings, were hoaxes.
Democrats have been quick to seize on her inflammatory rhetoric, attempting to make the Georgia Republican the face of the party as they look to gain seats in 2022. In the House, Democrats including House Majority Leader Steny Hoyer (Md.) have put the wheels in motion to potentially force a floor vote to remove Greene from the Education and Labor and Budget panels.
"I won't be talking about that right now. Let's hope that Leader McCarthy will respect the dignity of the House of Representatives and do the right thing, about his own caucus's actions,” Pelosi told reporters Tuesday evening.
The push to remove her from her committees has been met with some bipartisan support.
Top Republicans including Senate Minority Leader Mitch McConnell (R-Ky.) have condemned her remarks.
“Loony lies and conspiracy theories are cancer for the Republican Party and our country,” McConnell said in a statement on Monday.
“Somebody who’s suggested that perhaps no airplane hit the Pentagon on 9/11, that horrifying school shootings were pre-staged, and that the Clintons crashed JFK Jr.’s airplane is not living in reality. This has nothing to do with the challenges facing American families or the robust debates on substance that can strengthen our party.”
McConnell’s indirect criticisms of Greene added additional pressure on McCarthy to take action.
While some GOP lawmakers have voiced support for removing Greene from committees — similarly to how top Republicans removed former Rep. Steve King (R-Iowa) from his committee posts following his remarks on white supremacy — some have expressed reservations, arguing repercussions for comments made before she took office could set a bad precedent and could further divide the conference.
"Hoyer is playing with fire and backing us into a corner. No idea how this plays out," one Republican lawmaker said.
Greene’s comments raised flags for Republicans during the course of her campaign, with House Minority Whip Steve Scalise (R-La.) having backed her primary challenger, John Cowan, in the race to replace former Rep. Tom Graves (R-Ga.).
Greene’s impact on the GOP is expected to be brought up during the House Republicans' conference meeting on Wednesday, where lawmakers are also slated to discuss the future of Conference Chair Liz Cheney’s (R-Wyo.) role in leadership in the wake of her decision to support impeaching President Trump for inciting the deadly riot at the Capitol on Jan. 6.
National