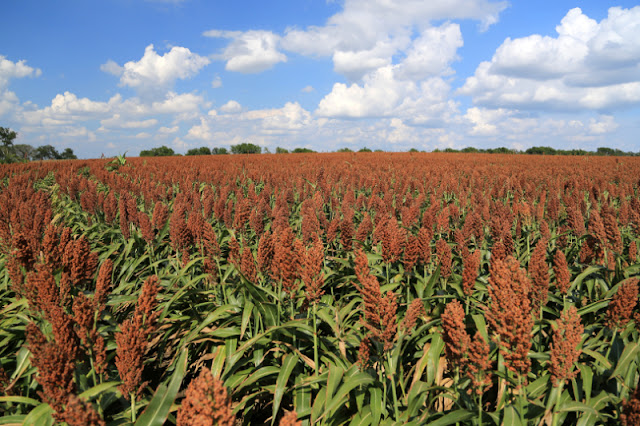 By Jennifer Dorsett
Grain sorghum acreage in the U.S. has decreased in recent years, going from a high of 10.24 million planted acres in 2001 to only 5.8 million in 2020.
The national trend looks similar in Texas, with planted sorghum acres rising slightly in 2008 and 2013 before settling to around 1.8 million planted acres last year.
Farmers choose what crops to plant based on a variety of factors, but if they’re in an area of the Lone Star State where sorghum grows well, Texas A&M AgriLife Extension Service Agronomist Calvin Trostle said farmers may consider the crop in 2021.
“Pricing is up with adjustments relative to Dec. ’21 corn,” Trostle said in the latest Texas Grain Sorghum Association newsletter. “Depending on your Texas location, this puts the hundredweight (cwt) price in the range of $8 per cwt and even $9 per cwt near the Texas Gulf Coast.”
But much can happen in the weeks leading up to planting in South Texas, he noted.
“These prospects for committing now to acres and bushels may seem far-fetched for grain sorghum, particularly for regions of Texas that plant later,” Trostle said. “But growers in the Lower Rio Grande Valley and coastal Texas are closer to planting. Some of that grain sorghum will be harvested and on its way to market, while the last of the summer’s grain sorghum crop is just being planted in the lower Texas High Plains.”
Sorghum is relatively cheaper to produce than some other crops, with input costs usually $50 to $100 per acre lower than corn.
However, Trostle advised farmers to avoid the common trap of thinking “low-input” means “no-input.”
Having the soil tested to better target nitrogen and phosphorus requirements will pay off in the long run, he said. A willingness to spray for insects when economic thresholds are met will net better returns than untreated and lower-yielding crops.
“If you believe grain sorghum likely has a significant portion of your 2021 cropping, I encourage you to talk with grain dealers in your area. See what they can offer on 2021 grain sorghum,” Trostle said. “There may be some deals out there that would surprise you.”
Soil testing for nitrogen, phosphorus and other nutrients is available through the AgriLife Soil Testing lab. Forms and information are available here.
Trostle said if farmers submit eight or more soil samples, there is a $2-per-sample discount for standard soil samples, as well as profile nitrogen soil samples.
More information on the economics of growing grain sorghum and other row crops written by Trostle and more AgriLife Extension experts is available at Texas Row Crops Newsletter.
Local