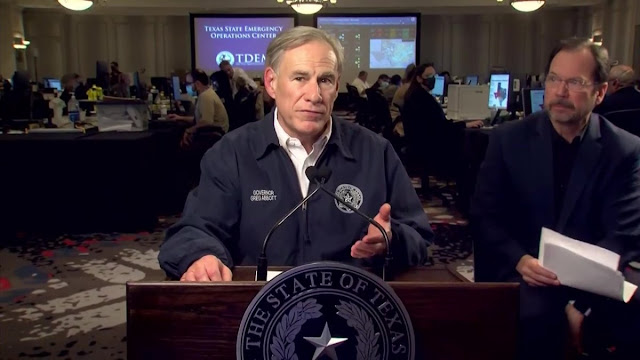 Texas Governor Greg Abbott delivered a short, five-minute speech from the state’s emergency operations center on Wednesday night regarding last week’s blackouts and the resulting fallout.
He highlighted three action items moving forward:
Relieve those who’ve been saddled with exorbitant utility bills;
Overhaul ERCOT;
Safeguard electricity generation against extreme weather.
During the address, the governor re-emphasized criticism of the state’s grid regulator, the Electric Reliability Council of Texas (ERCOT), and stressed his intention to establish reforms during the ongoing legislative session.
“Many of you are angry, and you have a right to be,” Abbott said. “I’m angry too — at a time when essential services were needed the most, the system broke.”
“You deserve answers. You will get those answers.”
Repeating his previous criticisms of the embattled council, Abbott added, “Before the storm hit, ERCOT repeatedly assured the state and the public that ERCOT was prepared. Those assurances turned out to be false.”
“We have learned that ERCOT operators should have acted quicker to stabilize the grid and to prevent power generators from being knocked offline.”
This comes in stark contrast to what outgoing ERCOT Vice-Chair, Peter Cramton, said in the body’s emergency meeting earlier today when he commended the control room’s actions.
At the conclusion of its meeting today, five board members resigned after pressure derived from their out-of-state residency. Abbott, however, said in his speech that “more must be done.”
Turning to his policy response to the crisis, Abbott again touched on the “winterization” of Texas’ energy grid and infrastructure. Last week, he requested that the legislature mandate and fund winterization upgrades to the parts of the system which buckled under the cold weather.
Abbott added that he is already working on solutions with Lt. Governor Dan Patrick and Speaker Dade Phelan.
The governor concluded, “No words can fix what happened or ease the pain of what you’ve endured. But this I assure you of this: this legislative session will not end until we fix these problems. And we will ensure that the tragic events of the past week are never repeated.”
Texas