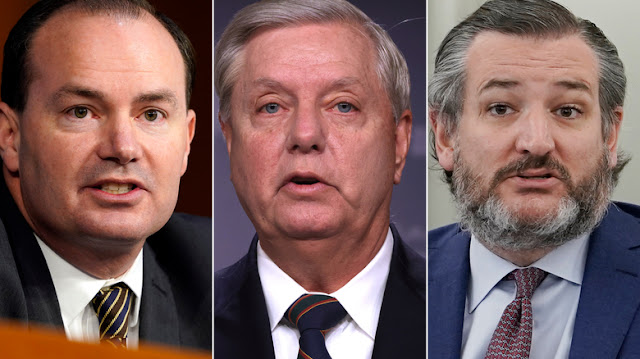 A group of GOP senators met with former President Trump's legal team on Thursday to discuss strategy as they prepare to present their opening arguments in the impeachment trial.
Sens. Ted Cruz (Texas), Mike Lee (R-Utah) and Lindsey Graham (R-S.C.) were spotted entering the meeting, which took place in a room near the Senate chamber that Trump's team is using as a workspace.
Cruz told reporters after the meeting that they were talking strategy for the defense's opening arguments on Friday.
"We were discussing their legal strategy and sharing our thoughts," Cruz said.
Asked to elaborate, Cruz added that they were talking "in terms of where the argument was and where to go."
"I think their job is to make clear how the house managers have not carried their burden of proof. They have not demonstrated that the president's conduct satisfies the legal standard of high crimes and misdemeanors," Cruz added.
Cruz also defended the meeting on Twitter, arguing that senators aren't jurors and that "Schumer repeatedly confers w/ House managers, as always & fully appropriate."
Graham didn't comment to reporters on the meeting as he left. A spokesperson for Lee said that Trump's team invited the GOP senators, so they met with them.
The meeting comes after Trump's team was panned by GOP senators Tuesday as the defense argued that the trial was unconstitutional because Trump is no longer president.
Asked about meeting with GOP senators who are jurors, David Schoen, a member of Trump's legal team, defended the decision.
"That's the practice here with impeachment. There's nothing about this thing that has any semblance of due process whatsoever," he said.
He added that the senators were "friendly guys," and "just talking about procedure, making sure we're familiar with the procedure."
"It was a very nice thing to make us feel welcome here," Schoen said.
Schoen also said the senators did not give any indication of what questions they would ask during a question-and-answer session that could start as soon as Friday, once opening arguments wrap up.
Though the Senate resolution governing the impeachment trial gives them two days, Schoen, a member of Trump's defense team, indicated that they could use three to four hours. Like other senators, he has said he thought the trial could wrap Saturday, days ahead of what was initially expected.
Schoen added that he did not talk with the former president during the meeting with GOP senators, however, he told reporters that he had spoken with Trump and described him as "very upbeat."
National