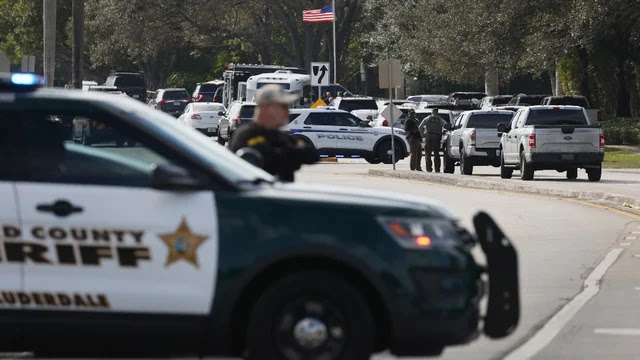 Two FBI agents were fatally shot and three others injured early Tuesday while serving a warrant in South Florida, the bureau confirmed.
The FBI said agents were serving a warrant in Sunrise, Fla., involving a "violent crimes against children case" when the shooting occurred.
The names of the two agents killed in the incident have not yet been released. Two of the injured agents were taken to an area hospital and are in stable condition.
The FBI reported the suspect is deceased, and the investigation is ongoing.
Sunrise police told the Miami Herald that the resident was a man who was suspected in a federal child pornography investigation.
A spokesperson for the Sunrise Police Department told The Hill that the FBI, along with other agencies, went to serve a warrant at about 6 a.m. before shots were fired. The suspect barricaded himself inside a home at the Water Terrace apartment complex, the department added.
The spokesperson said authorities could not confirm how many shots were fired.
The Sunrise Police Department reported “heavy police presence” in the area and requested that residents in the surrounding community stay in their homes.
The FBI agents were executing a search warrant to obtain the suspect’s computer and other evidence after tracking down the address of the computer via an internet service provider, law enforcement sources told the Herald. If evidence was found, federal authorities were reportedly likely to charge the man with possessing child pornography.
National