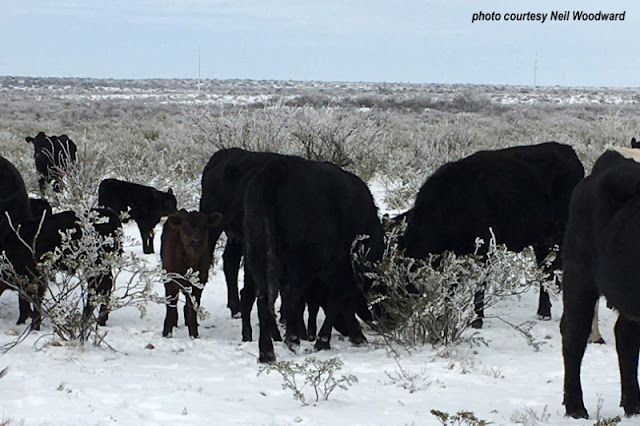 By Jennifer Dorsett
Traditionally, arid Far West Texas has been even drier than normal lately. After a good start in 2020, Pecos County started slipping into drought last July and hasn’t fully recovered yet.
This left livestock owners with reduced forage and water supplies in a dangerous situation after two recent extreme cold snaps, according to longtime rancher Neil Woodward.
“New Year’s Eve and New Year’s Day, we had about 18 inches of snow, and it stayed for about five days. That was really hard on our livestock,” Woodward said. “Now we’re getting another three to five days of extreme cold weather. So, that’s really hurting the livestock. We didn’t have a lot of grass to begin with, and what little we had is covered in snow and ice.”
Unfortunately, he’s also right in the middle of calving season.
“Our first-calf heifers started late December, and then my mature cow herd started mid-January. My heifers were really struggling during that New Year’s Day storm,” he said. “The bulk of my cow herd is now calved out, but we are still calving right now. Those cows are a lot tougher than we think, but it’s got to stress them to calve in the middle of this cold weather, especially when we don’t have the forage we need. Last year was a hard year, and we’re short on energy right now.”
Cattle not only receive sustenance from the feed they consume, but during cold weather, Woodward said the digestive process also helps them stay warm. He has a good supply of hay stored up. However, getting it to his herds has proven to be a challenge.
“I have plenty of hay. I just can’t get to the cows. These roads are not just slick. They started thawing out yesterday when it warmed up some and quickly became impassible. And our diesel has gelled in the fuel tanks, so getting equipment started and getting the hay out to the animals has really been hard,” he said. “If I can’t bring enough feed, I hate to pull them out of the brush to try to feed them when they’re down in there hopefully kind of warm and out of the worst of the weather. So, it’s a dilemma.”
He’s worried about the cattle’s access to fresh water.
“Water is the big thing. All our tanks are frozen. Of course, the lines are frozen, and we had to shut all the pumps off,” he said. “These nursing mama cows don’t give much milk if they can’t get a drink of water. I don’t know how much damage we’ve had yet, but we chop ice out of the water troughs until there’s no water left, and it’s not flowing.”
Predators like coyotes and mountain lions are getting desperate, too. It’s another issue that has Woodward concerned.
“They’re hungry and hurting, too. I’m real concerned about our newborn calves. The mamas are out trying to find something to eat, or we call her out there to eat and coyotes may just be sitting there waiting,” he said. “I’m sure that’s going on probably to a larger extent than we realize, but we won’t know the full extent of this until we mark calves in April. I’m afraid that’s when we’re going to see what’s really happened.”
Despite the trying conditions, he said all he can do is put on his winter gear and keep trying to get out to the pasture to see to his animals. He knows they’re relying on him for food and water.
“It’s tough. I’m worried about my livestock, but we’ve been very fortunate through it all because we never lost our power yet, and we’ve been able to get around some,” Woodward said. “There are many people who’ve had it a whole lot worse than I have.”
Texas