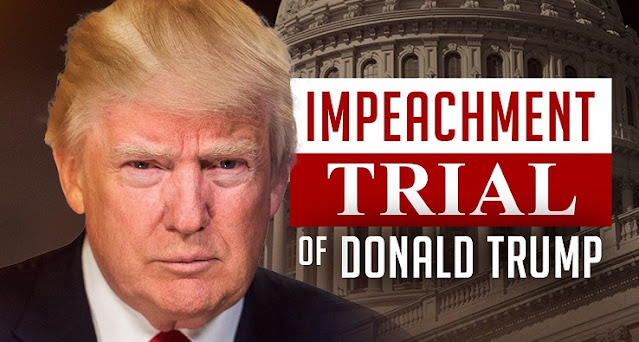 House Democrats pressing the Senate to convict former President Trump in his impeachment trial argued Thursday that an acquittal would raise the potential for him to incite violence again in the future.
Rep. Jamie Raskin (D-Md.), the lead impeachment manager, argued that Trump's pattern of incitement, which Democrats say led a mob to attack the Capitol on Jan. 6, would resume if he were to become president again.
"My dear colleagues, is there any political leader in this room who believes that if he is ever allowed by the Senate to get back into the Oval Office, Donald Trump would stop inciting violence to get his way?" Raskin asked. "Would you bet the lives of more police officers on that? Would you bet the safety of your family on that? Would you bet the future of your democracy on that?"
"So if he gets back into office and it happens again, we'll have no one to blame but ourselves," Raskin concluded.
Trump was impeached in the House for inciting the mob attack, putting lawmakers in both parties and Trump's own vice president, Mike Pence, in danger, in addition to staff, reporters and Capitol Police officers.
On Thursday, the final day of their arguments, the managers outlined how, throughout his presidency, Trump repeatedly sided with or was slow to condemn violent actors like now-Montana Gov. Greg Gianforte (R), who body-slammed a reporter while running for the House in 2017, or protesters who stormed the Michigan state Capitol to oppose a stay-at-home order last year.
They argued that the pro-Trump mob that stormed the Capitol on Jan. 6 in an attempt to stop Congress from ratifying President Biden's election victory believed he backed halting the proceedings by force.
Rep. Ted Lieu (D-Calif.) rejected the argument from Trump's lawyers and allies that Democrats want to impeach him because they want to shut down a political opponent and don't want to compete against him in another election.
"You know, I'm not afraid of Donald Trump running again in four years. I'm afraid he's going to run again and lose, because he can do this again," Lieu said.
Lieu pointed to how it took hours after the insurrection began on Jan. 6 for Trump to issue a pre-recorded video urging his supporters to go home — while telling them "we love you" and "you're very special" — and another day before he made another statement that the rioters "defiled the seat of American democracy."
"President Trump's lack of remorse shows that he will undoubtedly cause future harm if allowed, because he still refuses to account for his previous high, grave crime against our government," Lieu said.
Rep. Diana DeGette (D-Colo.) cited the rise in security threats from extremists, including to Biden's inauguration on Jan. 20 and state Capitols across the nation. Since the insurrection on Jan. 6, tall fencing with barbed wire has gone up around the Capitol and thousands of National Guard members remain on hand to assist Capitol Police.
Members of extremist groups such as the Proud Boys were involved in the attack against the Capitol, as well as white supremacists — including a man who wore a "Camp Auschwitz" shirt and others who carried Confederate flags.
Democrats also pointed to charging documents in which members of the mob stated that they believed Trump wanted them to storm the Capitol.
"We are not here to punish Donald Trump. We are here to prevent the seeds of hatred that he planted from bearing any more fruit," DeGette said.
"As my colleagues showed, this was not the first time that President Trump inspired violence. But it must be the last time that he is given a platform to do so. This must be our wake-up call. We must condemn it, because the threat is not over," she continued.
Democrats' argument that Trump didn't show remorse over the attack and didn't act quickly to stop the violence was bolstered by Sen. Tommy Tuberville's (R-Ala.) acknowledgement on Wednesday night that he received a phone call from Trump just after then-Vice President Pence was evacuated from the Senate chamber.
According to a CNN report, Trump was calling to ask Tuberville to make additional Electoral College objections to further delay the certification of Biden's victory.
"I mean, I don’t know if you’ve ever talked to President Trump. You don’t get many words in, but, uh, he didn’t get a chance to say a whole lot because I said, ‘Mr. President, they just took the vice president out, I’ve got to go,'" Tuberville told reporters on Capitol Hill.
Trump had tweeted around 2:24 p.m. on Jan. 6, shortly after the mob breached the Capitol, that "Mike Pence didn’t have the courage to do what should have been done to protect our Country and our Constitution."
National