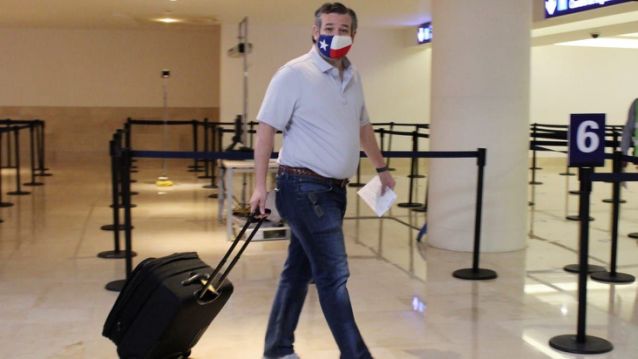 Sen. Ted Cruz (R-Texas) said on Thursday that “it was a mistake” to go to Cancun while many Texan households were without power in the midst of freezing winter storms.
“It was obviously a mistake. In hindsight, I wouldn’t have done it,” Cruz said in a video interview shared by the Recount.
“I was trying to be a dad,” Cruz continued. “And all of us have made decisions — when you got two girls who have been cold for two days and haven’t had heat or power and they’re saying, ‘Hey look, we don’t have school, why don’t we go. Let’s get out of here.’ "
In the background of the video, a crowd of people could be heard chanting "resign."
The Recount also shared video of demonstrators waiting outside Cruz's home holding signs that read "RESIGN" and "Cancun Cruz."
Cruz has received widespread bipartisan condemnation after it was reported Thursday morning that he had flown to Cancun while millions of Texas homes go without heat or electricity. The Houston Police Department later confirmed that officers had assisted Cruz in traveling to the airport.
Cruz arrived back in Texas on Thursday after reportedly booking an earlier ticket back from Cancun. He had reportedly planned to stay in Mexico until Saturday.
Calls have come in from Texas Democrats for Cruz to resign after reports of his trip surfaced.
“The Texas Democratic Party calls on Ted Cruz to resign or be expelled from office,” Texas Democratic Party Chairman Gilberto Hinojosa said in a statement.
Cruz also received backlash this week after tweets resurfaced of the senator mocking power outages in California. He later responded to the online outrage saying he had "no defense" for the statements.
The Texas power grid is separate from the two other major U.S. power grids and is not equipped to handle the freezing temperatures that have swept across the U.S. this week. Many Texans have found themselves without power, with pipes bursting and perishable food items expiring.
Texas Gov. Greg Abbott (R) stated Thursday evening that power had been restored to 2 million households in Texas.
"As of this afternoon there are no residential power outages due to lack of power generation," Abbott tweeted. "If any residence doesn’t have power it is due to downed power lines or the need for the power company to manually reconnect. If you don’t have power contact your local power provider."
National